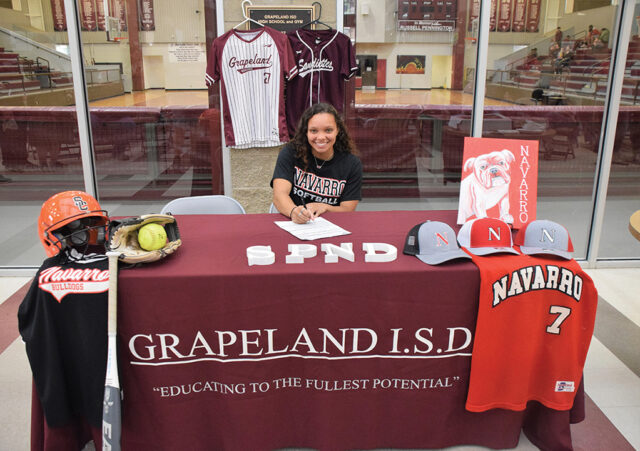 GRAPELAND – With the school year coming to an end, the Grapeland Sandiettes had one more chance to celebrate their accomplishments on the softball diamond as a four-year starter for the Sandiettes signed her National Letter of Intent to play at the next level.

On Tuesday, May 25, Kiera DeCluette inked her name on the dotted line to take her talents to Corsicana and join the Navarro College Lady Bulldogs Softball Team.

Among the many accolades she has accrued during her time as a Grapeland Sandiette, Kiera has been named All-State, All East Texas, All-District, Defensive MVP and Offensive MVP.

Following the signing ceremony, Kiera took time to speak with The Messenger about her decision.

She credited a former coach with helping to get her into Navarro and said, “My old coach, Joel Barbosa, helped me out a lot when I first started softball. I started off right-handed and then I moved to the left and became a slapper. I began to get a little more power and I was hitting the ball well. His daughter, Anika Barbosa, she committed to Navarro after she got out of high school. We were real close. He was like a dad to me and I looked at her like a big sister. I always looked up to her and so I said I want to go to Navarro.”

Kiera had verbally committed to Lamar University as a freshman but as she got closer to graduation, Kiera said she didn’t want to stray to far from home.

“Navarro wanted to give me a full ride and it’s not too far from home. It’s only about an hour and half and it’s an easy trip. I think Navarro will be best for me to help get adjusted to college life and being on my own,” Kiera said.

In high school, Kiera played both third base and shortstop but when she dons the red and white of Navarro, she said she expects to play in the outfield because of her speed, along with her defensive abilities.

As to what she would tell her Sandiette teammates to reach the next level, Kiera said, “I think it takes the will, passion and love for the game to reach the next level. If you don’t want to win the game, and if you don’t have the heart for it, you probably won’t get too far. I spent hours and hours on the softball field. I never missed a day, unless it was raining. If it was raining, I was hitting under the carport at the house.”

From all of us at The Messenger Sports, best of luck in your future on the softball diamond and all of your future endeavors.