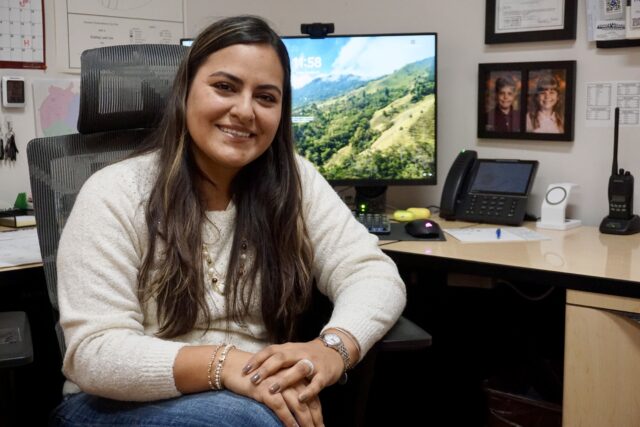 CROCKETT –  Rebecca Huffman grew up in Mexico City. With a population of over 25 million, it is just about as far away from Crockett – or Grapeland – as you can get. When her job in Mexico led her to an opportunity to work in Grapeland – she thought she might as well take a chance.

Houston County reminded Huffman of her family’s life in the rural Mexican state of Zacatecas. Clean air, small towns, lots of horses and cattle – she found she adapted quickly.

Six years have passed and Huffman now works as the City of Crockett’s Community Liaison among other jobs for the city. City Administrator John Angerstein had the idea for the position and put the job in Huffman’s hands.

“I feel like it’s more like, what is missing in the community? The community is where you call home – wherever you go,” Huffman explained. “Maybe you have loved ones, friends – and their home is like a home to you. We saw Crockett was missing some of that. Yes, we have diversity, but we are divided.My main goal, as a community liaison, is to create inclusion.”

Huffman said in spite of our many differences, all of the people in Crockett essentially want the same things.

“We don’t want to be separated by color. We don’t want that because it doesn’t work,” Huffman said. “In the end, we all want to work and go back home to our families. Put food on the table. And as a community, we want to create a better economy in Crockett.”

Huffman was responsible for the Hispanic culture celebration recently in Crockett. She presented the idea to Angerstein in early August and planned to hold the event in 2023. Angerstein loved the idea, but to Huffman’s surprise, said six weeks should be plenty of time to organize the event – if she started that day.

Huffman said next on the list is to designate an official “Main Street” in Crockett to get some of the downtown district listed as historical buildings. This should bring in extra funds to help fix up and re-do some of the old buildings downtown.

Asked what she misses most about living in Mexico, Huffman did not hesitate, “The food!” she

Huffman is excited about the opportunities to grow the community and help put Crockett “on the map.” She is confident that given more time, next year’s events will be even greater.

As this reporter and Huffman reminisced about some of the great cuisine to be found south of the border, she said, “Enough – you are making me too hungry!”

As Crockett works on bringing the community together – they might not need to look further than some authentic Mexican cooking. That’s something we can all agree on.