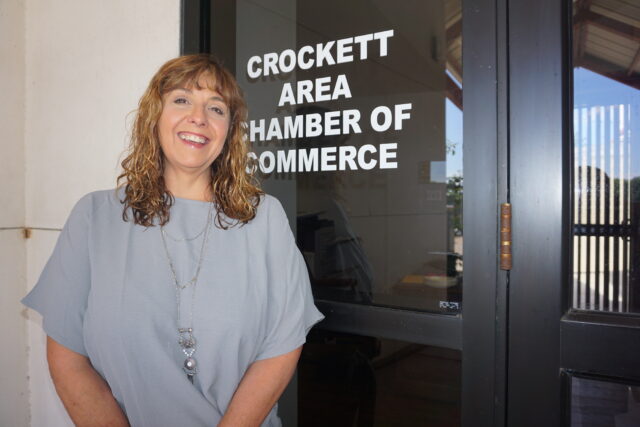 CROCKETT – The Crockett Area Chamber of Commerce was organized more than 95 years ago. A non-profit organization, the Chamber serves the cities of Crockett, Grapeland, Kennard, Latexo and Lovelady.

From the Chamber’s website to its many events, there is a professionalism and big city spark to what the Chamber does. As the Chamber transitions to its new home downtown, much of the dynamic spirit of the Chamber comes down to one person.

Liza Clark is originally from Marlin, TX – daughter of small business owners herself. When her husband got a job in Crockett, Clark followed. She took over the job of Executive Director in 2020 – right as the COVID lockdowns came and shut down many businesses.

“My first year was a struggle. But it was so important to help businesses stay open, Clark said. “So much of what I learned from my family having a small business affects how I look at how our businesses struggle. ”

“I just fell into this job,” Clark said. “It was such a blessing. There is so much more than just events. There is the business side. I had never worked in a Chamber so I didn’t understand everything. But something just clicked. ”

When she first arrived in Crockett, Clark visited the Crockett square for the Christmas festival and not only loved what she saw – she thought she could help.

“My first Christmas in Crockett I fell in love. I just love Crockett,” Clark exclaimed. “There was no social media on it, no advertising. I thought it was better to ask forgiveness than permission! So I started advertising online for Crockett. I was between jobs at the time and I volunteered everywhere I could. I would take pictures and videos and I would just blast it!”

Clark’s attention to the Christmas festival grew over the years attracting more and more visitors to Crockett. The economic benefit back to the community grew right along with it.

“We grew Christmas in Crockett from 125 booths when I first came here – to almost 300 last year,” Clark explained. “In 2018, the economic impact from the Christmas in Crockett event was around $979,000 back into the community. The impact from last year’s event was $2.2 million back into Crockett. I estimated around 15,000 people came that day, but (Crockett Police Chief Clayton) Smith told me it was about 20,000 people.”

Clark understands the challenges that existing businesses – and possible newcomers – face in the area.

“There is an employment issue right now with businesses not being able to hire adequate employees,” Clark said. “I am not sure why. I don’t really know why. Maybe some COVID incentives are still in place keeping people from coming back to work. That is a big challenge for our businesses right now – especially my restaurants.”

Her plans and ambitions for the rest of us seem boundless too. Clark sees positive changes in the city of Crockett that will accelerate the growth of the city.

“There is explosive growth downtown,” Clark said. “Also we are trying to pull tourism dollars into the city. I think that is remarkable. It’s something we can build on. Camp Street and Goliad is springing to life. That is going to be a trickle effect that will go all the way downtown. Downtown is so beautiful; it’s so cool.”

Clark never misses a beat to promote her adopted home.

“I was working on getting our new office set up downtown,” Clark explained. “A couple came in from a small town and I was telling them about Crockett, about how much I loved it. They were just visiting. But, that day, I was able to put them in touch with a realtor who is a member of the Chamber. They went to look at a  house in Crockett that day. There’s so much potential to our city right now.”

Clark said the last two years have caused people in bigger communities to look again at living in places like Crockett.

“I feel like we are poised for explosive growth especially where we are with the world now and the flight out of the major cities,” Clark said.  “Everything’s better in the country.”

Asked where she sees the community and the Chamber in the next five years, Clark was specific.

“I would like to see the tourism branch of the Chamber grow, as well as expanding our membership. The more members I have, the more networking I can do. I can put people in touch with each other. It’s remarkable how much we all need each other in this time.”