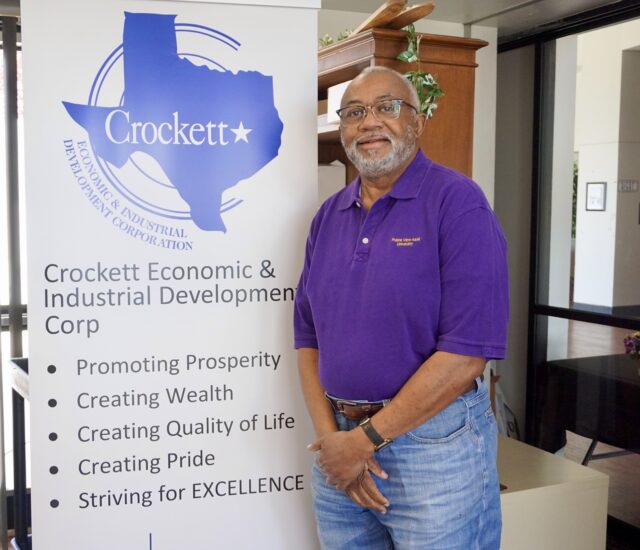 CROCKETT –  The Crockett Economic and Industrial Development Corporation (CEIDC) was started in 1995 as a way to attract new businesses to the area and promote economic growth.

Since then, the CEIDC has helped to promote the greater Crockett area to both industries and educational entities to relocate to Crockett.

The effort has not come without its failures along the way – and not without its critics.

Crockett can be a tough sale for investors coming from outside of the area. Potential businesspeople are interested in not only infrastructure and tax incentives, but intangibles like the available workforce. Schools, hospitals and other local businesses in the area – all must be factored in to the decision.

James Gentry has served the CEIDC both on the board and as Executive Director since 1996. He tries to “sell” Crockett to potential businesses or tourism agencies, but has seen some of the negative perceptions affect the final decision.

Gentry teams up with community leaders to present Crockett as a viable option for businesses.

“When companies come to town I don’t just meet with them by myself,” Gentry explained. “I try to include people who represent the whole community. I am able to bring people from the county, the city, the hospital district, the appraisal district, the Piney Woods Fine Arts Association – I have everybody at the table.”

For visiting businesspeople, that is something unique – many people tell Gentry they are usually not greeted by representatives of the whole community.

Sometimes the losses can be heartbreaking.

In April, Crockett was among the finalists of three cities for a new business looking to create over a hundred new jobs. Gentry brought the “team” to show the newcomers what Crockett could do for them. When the dust settled, the company decided to go to Lufkin. Lufkin edged out Crockett based on one small detail – they have a foreign trade designation – and Crockett does not.

“You lick your wounds and you say, ‘OK, we learn from this, and we move forward.” Gentry noted.

Gentry is looking into getting Crockett such a designation so this will not be an issue in the future.

The debate still rages around the CEIDC and Gentry himself – from requested forensic audits to freedom of information (FOIA) requests. Each side of the debate certainly has its point of view. Those who support the CEIDC say that the city will never grow without investment, without attracting new businesses to the area. How do you create jobs and better lives for our residents without increasing the size of the whole pie?

The detractors say there have not been enough “wins” given the money invested. They say there is not enough transparency in the CEIDC’s transactions and how they spend taxpayers’ money.

Even the issue of overseeing the CEIDC is much more complicated than it at first seems. A forensic audit can cost tens of thousands of dollars. FOIA requests must be checked by the city attorney, and time must be spent redacting information. This all costs more time and money – and can take away from achieving the mission the CEIDC was created to accomplish.

Gentry for his part, gave up a career of 40 years as an engineer. Before moving to Crockett, he worked in both the oil industry as well as the plastics industry all across the country. He has been a part of the community for over 25 years, raising a family here that have all now gone on to pursue their own careers.

Gentry notes the positives in Crockett still outweigh the negatives.

“We are one of the oldest towns and counties in the State of Texas,” Gentry pointed out. “We have the transportation facilities here. We’re close enough, but not too close to the Gulf of Mexico as regards to tropical weather. We have a potential workforce – that if we put the right training in place – could be a plus for us.”

Gentry has been frustrated by the companies that have not come to Crockett, or that came and left abruptly. It is indeed the question at the heart of the debate over the CEIDC: Do you take the good with the bad and try harder or fight smarter next time? Or do you cut your losses and tear the CEIDC down?

Most people would have given up long ago. Gentry, however, maintains his mission means more to him than the criticism he knows he receives – or most likely anyone else in this position – would receive.

Regarding his critics, Gentry says he understands the need for transparency – but wishes he could address the critics face to face.

“I would love for them to come here and have a conversation,” Gentry said. “Tell me what your real concerns are, versus grandstanding in a public forum. Allow me to ask you questions too. They may have a valid point. But they never came here to have that conversation. I deserve the respect to explain the situation, or say, ‘Maybe we didn’t do it like you think we should have, but these were the circumstances at that time.”

Only the future knows the outcome of the CEIDC and its mission in Crockett. Gentry himself sees his mission clearly.

“When I first came here Crockett was a booming town,” Gentry concluded. “Between 2008 and now we have lost a lot of jobs due to the economy, shutdowns, and other things. A lot of those people still live here. But they have to travel 75-100 miles away from here for jobs. I want to bring those people home.”