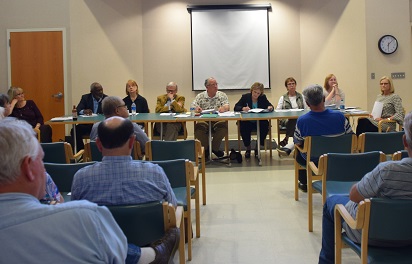 All is Forgiven … or is it?

HOUSTON COUNTY – On April 16, the Houston County Hospital District (HCHD) Board of Directors met in a regularly scheduled meeting with the primary purpose of listening to a report on the status of Crockett Medical Center from the two men primarily responsible for reopening the hospital – Dr. Subir Chhikara and Dr. Kelly Tjelemand.

Once the briefing from the two doctors concluded, the HCHD board adjourned into executive session. When the directors emerged from behind closed doors, it was revealed the HCHD had been offered a chance to retire a $4 million debt owed by the HCHD to a foundation created by East Texas Medical Center (ETMC).

HCHD Board President Dr. Bob Grier explained what this entailed.

“East Texas Medical Center – when they dissolved and sold themselves – a foundation was formed that took the money that was given in the sale. But then, they were left with those properties and other entities that were in the red. There was a note (held by the HCHD) on the medical office building and the clinic building that comes due this May,” he said.

Grier said he had put together a committee in order to address the situation with the foundation’s representatives. Following the initial negotiations, Grier indicated the foundation representatives spoke with their board of directors “… and the agreement says they will forgive the note.”

“The current note is a few dollars shy of $4 million. So, my motion is that we accept that and proceed with the approval of that letter of forgiveness. I’m making the motion that we accept the agreement (with) the East Texas Foundation that is forgiving the note to the board,” Grier said.

After the motion was seconded by HCHD VP Dr. John Stovall, the matter was opened for further discussion.

“We will own the building and we will not owe the $4 million,” board member Carol Dawson clarified.

Board member Dina Pipes added, “I think it’s great that ETMC is forgiving this debt we have. And I think it’s very thoughtful. It shows that they do still care for the citizens of Houston County or they wouldn’t be willing to do this.”

As she continued, Pipes urged the board to proceed with caution. She said she would like to see the matter tabled for further study and recommended the board seek guidance from the Texas Attorney General, a tax attorney and even an outside auditor concerning “… any type of repercussion from them giving us $4 million.”

Once Pipes had expressed her concerns, Dawson pointed out the foundation representatives could change their minds and renege on the deal.

“I think we need to sign it and get it done,” she said. “There’s a motion on the table. I think we need to get this done before anybody changes their mind. This is a fabulous windfall. They could withdraw it tomorrow.”

Board Secretary Barbara Crowson also indicated her support for the passage of the motion.

“I appreciate the generosity of the foundation. Whatever ETMC’s motive was for allowing the foundation to have that is fine with me. I am appreciative of all the efforts of our negotiating committee, and of our attorney, Mr. Spurck, and for his advice. I think that, since this offer has been made to us, that we should accept it with expediency and gratefulness,” she said.

The motion was put to a vote and the results showed seven directors in favor of approving the matter while Pipes and board member Rhoda Brown abstained from the vote.

“I think I’ll abstain, as well,” Brown said. “Let me explain why. I was not here during the time that all of this was done. I don’t know the history. I don’t understand all of the facts. I do know for a fact that ETMC left town and they were treated very bad. People went there and spoke to them and were very rude to them. I think that it is absolutely wonderful that they are doing this. I am just completely shocked that they would do that for our county. I am thrilled to death that they are.”

ETP Announces $90K Donation to CISD for New Bus
Dubious Distinction or Manipulated Statistics?
When They Don't Believe You!