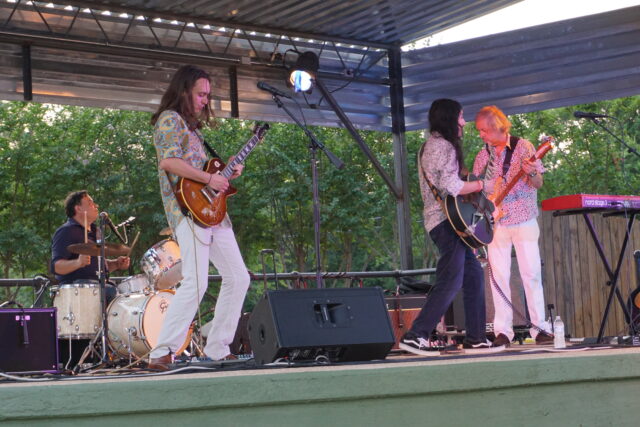 CROCKETT – They say “All You Need is Love”, but even the Texas heat beats living in a “Yellow Submarine.” You could go on all day with Beatles’ references, but the concert in Davy Crockett Park last Friday night brought fans fond memories of the Fab Four.

The concert held by a Beatles tribute group known as “Band on the Run” was the final show this summer of the ‘Drive In’ concert series hosted by the Piney Woods Fine Arts Association (PWFAA).

The concerts were moved two years ago as a response to COVID, but have proved very popular, and with help from local Boy Scouts, businesses, and the Crockett City council, the stage in the park was expanded and repaired and it proved to be a perfect venue.

“This is perfect, you can hear the sound from far away, there’s room for the kids to run around and there is a breeze in the evening. We also find out that our largest groups mostly come out for tribute bands,” PWFAA Executive Director Ann Walker.

Band on the Run was formed 12 years ago by a group of friends who were both musicians and Beatles fans.

Johnny Ono who plays the part of John Lennon, said although he is no relation to Yoko, the band plays their favorite Beatles songs for fun in their spare time.

“We just wanted to get together and play a different type of Beatles show. We play normal Beatles songs that everybody’s heard before, but we also dig in to their solo careers and like to play songs that don’t get played that often,” he said.

The band played many Beatles tunes, mostly from their later years such as “Back in the USSR” and “The Ballad of John and Yoko.” Fans sung along to the hits and chatted and snacked as the sun lowered and the evening slowly began to cool.

Crockett resident David Spencer hasn’t missed a show in the park this year and is proud that the concert series has come to town.

He said, “I went to school here and then went into the military and I came back here 20 years ago; this is home! This is wonderful music and music is the cure!”

Ono says the band was impressed by Crockett and the crowd and the improved stage.

“This is awesome, this is great!” he expressed. “It means a lot for us to come out and share the music we love with everybody here.”

This time of year, we tend to make every decision based on the temperature and heat index, but the crowd took the summer heat in stride.

Kathy Davis from the Houston County Lake area wasn’t going to let the heat stop her from enjoying her first concert in the park.

The PWAA has plans to expand the concert series next year with different groups and styles of music.