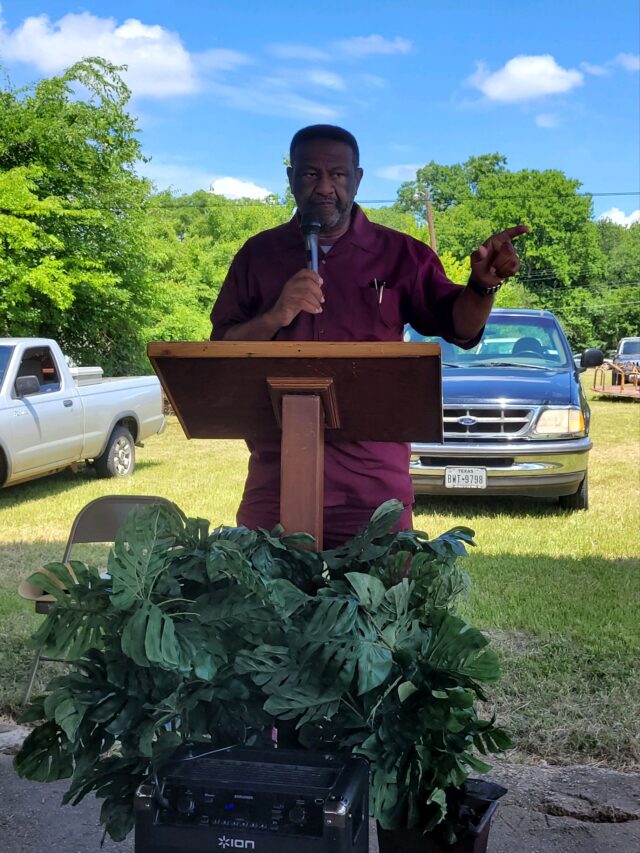 CROCKETT – A day of festivities and revelry was held this past Saturday in Crockett as area residents gathered for the 36th Annual Juneteenth Celebration. This year’s theme was “Pursuing Our Legacy” and the Grand Marshall was for the event was Crockett resident Mr. Hilliard McKnight.

Juneteenth commemorates African American freedom and emphasizes education and achievement. It is a day, a week, and in some areas a month marked with celebrations, guest speakers, picnics and family gatherings. June 19, 1865 marks the day word of the Emancipation Proclamation finally reached the state of Texas. It was close to two and a half years after the U.S. abolishment of slavery in 1863, when Union Gen. Gordon Granger read the Emancipation Proclamation from a balcony in Galveston and African Americans in Texas were finally freed. Since then, the date has become an International Day of Celebration and was officially declared a state holiday in 1980.

Once the parade reached its destination at the Groves Center, the formal ceremonies began. Crockett Mayor Dr. Ianthia Fisher and Ms. Lynda Warfield, who both helped coordinate the event, welcomed all of those in attendance.

After the invocation and pledges to the US and Texas flags, the crowd came together as one to sing the song “Lift Every Voice and Sing.” The song contains a very appropriate verse for the day’s festivities which says, “We have come over a way that with tears have been watered, we have come treading our path through the blood of the slaughtered, out from the gloomy past, till now we stand at last where the white gleam of our bright star is cast.”

Following the conclusion of the song, Dr. Fisher welcomed city and county officials as well as religious leaders.

Dr. Thelma Douglas, President of the Mary Allen Museum was next to speak and provided reflections on Juneteenth.

“It is a name for a holiday celebrating June 19, 1865. A day when Union soldiers arrived in Texas and spread the word that President Abraham Lincoln had delivered the Emancipation Proclamation. The proclamation declared that all persons held as slaves in the rebellious states are and hence forward shall be free,” Dr. Douglass said.

She added the proclamation was limited in numerous ways and depended on Union soldiers to enforce it.

“Texas did not hear of Lincoln’s proclamation, which he gave in 1863, until more than two years after it was issued. Although Juneteenth has been informally celebrated since 1865, it wasn’t until June 3, 1979 that Texas became the first state to proclaim Emancipation Day as an official state holiday. Again, we salute President Biden and all who supported the bill declaring Juneteenth a federal holiday, effective June 18, 2021,” she said.

Dr. Fisher returned to the podium following Dr. Douglass and read a proclamation from the City of Crockett declaring June 19 as Juneteenth Day. The proclamation read, in part, “And whereas, Juneteenth today celebrates African-American freedom while encouraging self-development and respect for all cultures as it takes on a more national and even global perspective, the events of 1865 in Texas are not forgotten for all of the roots tie back to this fertile soil from which a national day of pride is growing. And whereas, the 19th day of June, commonly called Juneteenth, became a statewide holiday in Jan. 1980 through the efforts of Al Edwards, an African American state legislator. Rep. Edwards has since actively sought to spread the observance of Juneteenth. We have now gone from the state to the federal level. We celebrate the federal holiday of Juneteenth. Now therefore, I, Ianthia Fisher, mayor of the city of Crockett, by virtue of the legal authority vested in me, do by officially proclaim the day of June 19, 2022 as Juneteenth Day.”

She then introduced the parade Grand Marshal, Mr. Hilliard McKnight.

“This is what I want you guys to understand. Never be too thirsty for opportunity that you will drink from every cup,” he said. “Sometimes you will get poisoned. What I’m trying to say is don’t do everything. Find your role, work it and develop it. No one can beat you at being you. We have more going for us than we do against us. I’m not talking about Boston and New York. I just thank God for this opportunity. I don’t see myself as an icon but I do see myself as a role model. An Icon will do a little bit of everything. We celebrate the past but we are embracing the future.”