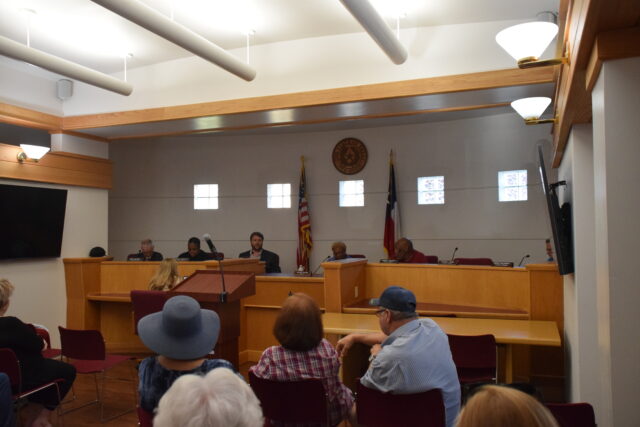 CROCKETT – The temperatures are getting warmer outside and on Monday evening, June 6, the atmosphere in the Crockett City Council Chambers heated up pretty quick once the meeting got underway.

After welcoming those in attendance, Crockett Mayor Dr. Ianthia Fisher opened the floor for public comments. Six Crockett residents – Sherald Wood, Craig Hopkins, Chari Shuttlesworth, Anthony Shuttlesworth, Virginia Lewis and Diane Rhone – all spoke about alleged issues they had been made aware of concerning the operations of the Crockett Economic Development and Industrial Corporation (CEIDC).

All six alleged the CEIDC was being mismanaged both operationally and fiscally. In addition, the six residents called for a cessation of activities by the CEIDC as well as calling for a forensic audit of the CEIDC books.

Following the public forum, Councilman Gene Caldwell commented he had several thoughts on the matter but stressed he was not directly responding to any specific talking point brought forward during the comments period.

“Due to these allegations – these folks are all our constituents in this town. They are all voters and they have all voted for us to represent them to be honest, factful and transparent in everything we do. So, if they want a forensic audit, I say we have a special meeting where we can discuss this amongst ourselves, set up a date and time. We need to set up a special meeting and bring these allegations – true or false – and if they’re true, let it lay. If they are falsehoods, let’s just move forward. But we need to have a special meeting to come to a consensus on what we need to do,” Caldwell said.

Mayor Pro Tem Mike Marsh replied to his colleague and said, “I think we should put this on the next agenda. It’s one way or the other. I’m not saying its true or false. I’m saying we need to get this cleared up.”

Mayor Fisher inquired if what Marsh was saying was to place the item of a forensic audit for the CEIDC on a future agenda to be voted on.

City Administrator John Angerstein explained the only type of motion that could be made, because a forensic audit was not on the Monday evening agenda, was to make a motion to place an item pertaining to discussion and possible action to call for a forensic audit on a future council agenda.

A motion was made, seconded and unanimously approved to place a CEIDC forensic audit discussion on the council’s next agenda.

Following the forensic audit discussion, Angerstein provided those in attendance with an update on major projects and grant programs currently undertaken by the city. He said construction on several projects such as water line repair and replacement along E. Goliad and E. Houston was slated to begin in the first quarter of 2023, while water main work, fiber optic cable installation and street construction was scheduled for the second quarter of 2023.

Other projects he discussed included the city swimming pool, which the city administrator said he hoped to have completed and opened in time for the summer of 2023.

As the meeting continued, Angerstein said he had received a notice from Oncor to increase rates within the city. He indicated a resolution opposing a rate increase had been prepared. The resolution also allowed the city to join with other cities across Texas to oppose the increase and to retain the legal firm of Herrera Law and Associates to represent the city in negotiations with Oncor. The resolution was unanimously passed.