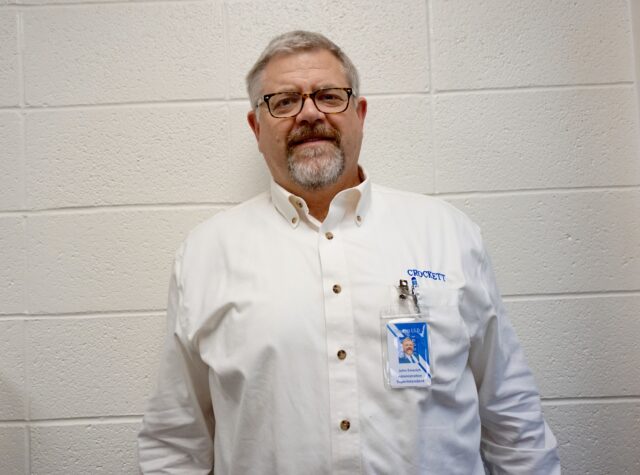 CROCKETT –    Longtime educator and teacher John Emerich had spent most of his adult life either in a classroom or school administration. In March of 2020, when the Crockett Independent School District (CISD) superintendent retired, Emerich was ready to take on the job. Circumstances don’t always comply with the best laid plans of mice and men.

Emerich’s father was in the Air Force and the family moved often. They finally settled in the state of Washington where Emerich finished high school and college.

The next step in his life was decided almost at random.

“My college roommate and I decided to go somewhere and just picked a spot on the map –  and we picked Texas,” Emerich said. “We said, ‘Ok – we’ll go to Texas!’ We both ended up getting teaching jobs.”

While teaching in Mount Pleasant, Emerich met his future wife, who was living in College Station.  He figured she would join him at some point, but she took things into her own hands.

“Unbeknownst to me, she spoke with the local school and I received an application in the mail. I got a job and moved down there,” Emerich said. “I was there teaching for four years and then got my first administrative job in Madisonville.”

Emerich continued to work in school administration until the opportunity came to get out of the bigger cities and take on a new challenge.

“I had been working almost 14 years in New Caney and saw the amazing growth there. I had been the Assistant Superintendent there. When my kids finally graduated college, I spoke with the superintendent at the time here in Crockett. When he retired, the school board thought I was the right person and I am very grateful for that,” Emerich noted.

Emerich and his wife have lived for five years now in Crockett. Emerich said he has been in Texas over 30 years now – longer than anywhere else – and for him, this is home.

“My wife and I both enjoy smaller towns,” Emerich said. “I don’t like traffic anymore. Sometimes on my way to work, I pull up to the four-way stop and there’s three or four cars in front of me and I think, ‘Oh, it’s a busy day on the Loop! We enjoy it, we love the community. One-high school towns are the backbone of the state of Texas. The school is part of the community – I am trying to make sure we improve and build on that.”

COVID wasn’t the only challenge facing Emerich at CISD. Crockett has its own unique problems that affect students at each level of education.

“It’s no secret we have high poverty here. Poverty here is the number one factor that affects a student’s performance in school. That’s not just here in Crockett – that’s anywhere. It’s something we have to deal with. We moved up two letter grades in the Texas Education Agency’s school grading system.”

Emerich tries to fill the roles at the schools with the best people possible. He said that is not easy given the current situation over the last several years.

“We are facing a teacher shortage here in Crockett – and around the country. A large part of that has been what teachers have gone through the last couple of years,” Emerich said. “The strain on them, the requirements – back and forth from online learning – and teachers fearing for their own safety during the pandemic. We are doing a lot of things for our teachers, taking advantage of different grant programs to help our teachers. If our teachers do a great job, some of them could earn up to $25,000 a year more. That’s a lot of money!”

Emerich has been very public about his goal to change the culture of Crockett schools. The CISD motto – ‘one town, one school, one family – has led him to hire teachers and administrators who can help him with that needed change.

“Part of changing the culture here is the new Athletic Director Alton Dixon I hired a year and a half ago,” Emerich said. “One of the things I charged him with is changing the culture of how the kids behaved and how they acted. He has been working on that and been doing a good job.”

“I am looking for people that are passionate about wanting to teach kids,” Emerich continued. “Part of our job sometimes is to help to raise kids, too. That is just what has fallen on educators to be part of. I preach all the time to the staff, ‘I want people who are going to treat kids they way they want to be treated.’ To treat kids like people – kids are people. If you truly love and respect the kids you are teaching, the kids will perform better. They can sense if someone is real.”

With another homecoming year held this Friday, Sept, 30, Emerich was happy to return to Crockett’s pre-pandemic traditions.

“We were glad to get back to the downtown parade after COVID. We started a community pep rally. We wanted to combine those events and it went great,” Emerich said.

Asked what he thought the final score would be for the Friday night game, Emerich said win or lose, he was proud of how his students handled themselves.

“It’s difficult to predict, but I will tell you I have been so proud of our kids this year. Most of our games have been close this year and could have gone either way,” Emerich said. “I have been so proud of how our kids have reacted in difficult situations in those games. Our kids don’t give up – they keep fighting. That’s a testament to the coach and his staff. We have hardly had any penalties. Sometime our kids get a ‘bad rap.’ Our kids are good kids.”