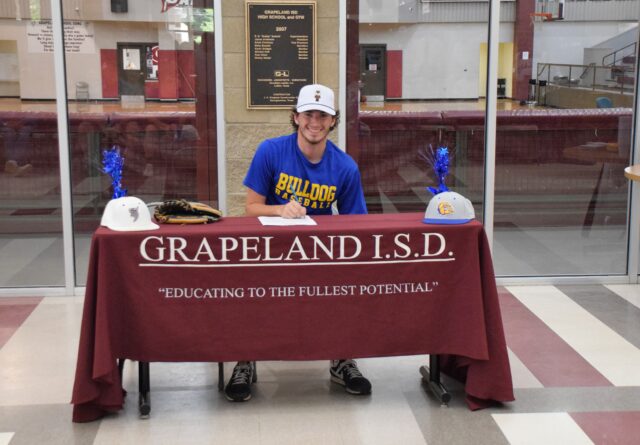 From Sandie to Bulldog

GRAPELAND – During the season, when he needed a big out, his teammates in the dugout would encourage him to get that “bulldog face.” Once that look set in, opposing hitters knew they were in trouble.

On Monday afternoon, Grapeland Sandie Peyton Prater got that bulldog face once again – albeit this time with a wide smile – as he signed his National Letter of Intent to play baseball for the Jarvis Christian College Bulldogs.

Before Prater inked his name to the letter of intent. Grapeland AD Jordan Wood extolled his virtues.

“He knows what he wants to do and he knows how to get there. I’m very proud of him and the work he put in. There’s whole lot I can say about Peyton. He’ll come up and he’ll talk, but he’s not afraid to put the work in. I’m real excited about him and the success he will have in baseball, in school and everything else. He’s more than a baseball player. He’s a great person to be around, a great leader and a great student,” the AD said.

“One of the things I told him after the season was over,” Head Baseball Coach Brock LeMire said, “was I wish I had several more seasons with him. I think he knows this is important and he knows that is not a normal thing for any athlete to sign to play a sport at the next level. This is the 20th kid I’ve sent to the next level in my coaching career. What I tell these kids is it’s not easy. It’s a completely different ballgame. The one thing about baseball is you have to love the game to survive/ I know he loves it. He works hard. He’s always hitting me up to go hit BP (batting practice) or throw, which very valuable and rare nowadays.”

Following the hugs, handshakes and numerous photos, Prater discussed how this all came about.

“Coach LeMire. It was the beginning of the season and I was worried that I wouldn’t have a good year. Thankfully, I did and he was able to schedule me for a workout. I went back for another workout and they made me an offer,” he said.

As to what he liked about the JCC campus, Prater said, “It’s an HBCU (historically Black colleges and universities) and there is a lot of Greek (fraternal) life. To me it’s really interesting to learn about Greek life. The baseball dorms are nice and the field is nice as well.”

He said he plans to study special education while at JCC “… and I’m going to work on coaching to become a baseball coach.”

Concerning what advice he would give to his Grapeland teammates, who aspire to continue their athletic careers after high school, Prater commented, “Just work your butt off, day in and day out.”

He added he would like to thank God, his parents, his teammates and coaching staff for helping him to achieve his goal of playing baseball at the collegiate level.

From all of us at The Messenger Sports, congratulations on your signing and best of luck in your future endeavors.