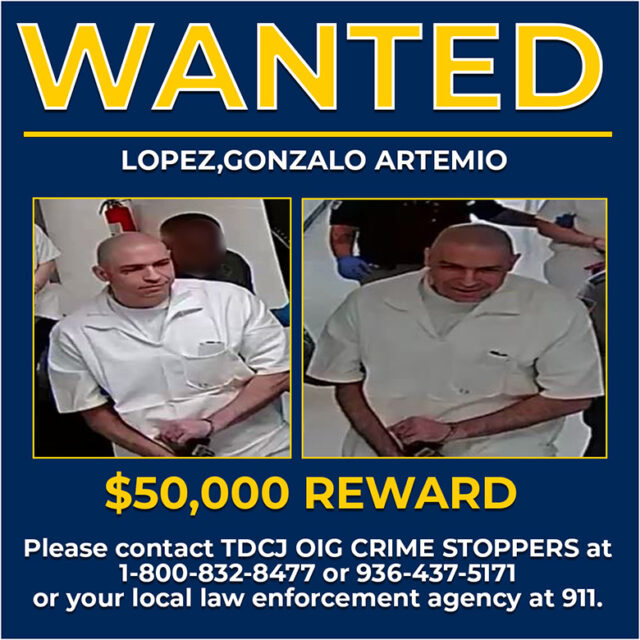 EAST TEXAS – The search for escaped inmate Gonzalo Artemio Lopez has now entered its third week. On May 12, Lopez commandeered a Texas Department of Criminal Justice (TDCJ) transport bus, stabbed a corrections officer and fled on foot into a wooded area near Highway 7 west in Leon County, approximately 1.5 miles from Interstate 45.

Over the weekend, TDCJ officials released the following statement, “The search for escapee Gonzalo Lopez is entering a new, expanded phase. The TDCJ, the Office of Inspector General (OIG), along with numerous law enforcement agencies have concluded an exhaustive ground and air search in Leon County.”

The statement released on May 20 went on to state, “A contingent of personnel will remain in the county and will be conducting strategic searches of areas outside the original secured perimeter. The renewed focus by OIG, Texas Rangers and the U.S. Marshals is to leave no stone unturned as they follow leads and track Lopez’s whereabouts.”

TDCJ advises Lopez should be considered armed and dangerous. Those with info on Lopez should call TDCJ OIG Crime Stoppers at 1-800-832-8477 or 936-437-5171. Lopez is approximately 6ft. tall and weighs 190 lbs. He was last seen wearing white clothing. A $50,000 reward is being offered for info leading to his capture.

Visitation at TDCJ units had been cancelled following his escape but resumed as normal at all facilities on Monday, May 23.