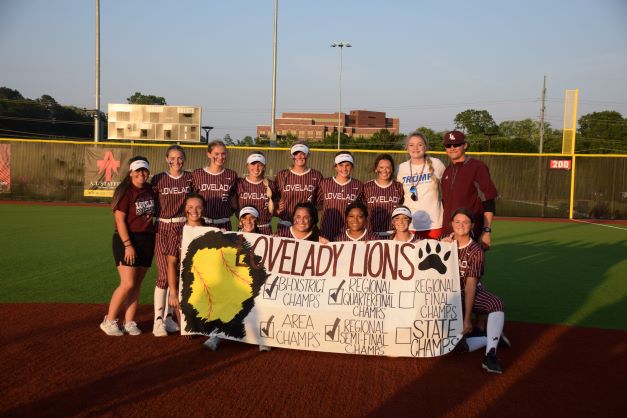 TYLER – After a two-day break between Games One and Two, the Lovelady Lady Lions and Como-Pickton Lady Eagles were back at Tyler Legacy High School for the second game of their best-of-three Regional Semifinals series.

The Lady Lions had won Game One by a score of 10-0 in five innings, thanks to the pitching of Macie LaRue, timely hitting from the Lovelady bats and several unforced errors from the Lady Eagles defense.

It took the Lady Lions an extra inning on Thursday, but Game Two pretty much followed the same script as Game One. Lovelady jumped out to an early lead, then let their defensive prowess and the lumber at the plate finish off Como-Pickton in six innings, also by a score of 10-0.

Mattison Buster was back in the circle for the Lady Eagles on Thursday and once again she had a rough first inning. After giving up three runs in the opening frame on Tuesday, she gave up four on Thursday.

Mihyia Davis led off the game with a single to center and stole second. Scout Lovell followed her in the order and ripped a double into the left field corner to drive in Davis. After Haven Prager popped up to second, Linda Martinez was intentionally walked. A double steal moved Lovell and Martinez up a base and when Morgan Womack drew a walk, the bases were loaded with one out.

That brought Rylee Biedrzycki to the plate and she delivered a single to right, driving in Lovell and Martinez. An error on the throw also allowed Womack to scamper around the bases and cross the plate to make the score 4-0. That was all the Lady Lions would get in the first inning, but it was more than enough for LaRue and the Lovelady defense.

LaRue was in the circle for the Lady Lions and she worked an easy first inning. She struck out both Bella Romero and Lauren Lewellen to open the bottom of the first and then got Buster to pop up to second for the third out.

Buster regained her composure in the second inning and made quick work of the Lady Lions. She got Davis to ground into a 4-3 force at first and then got Lovell to ground out to third. Prager was up next but couldn’t catch up to a Buster fastball and went down on strikes for the third out.

The Lady Eagles threatened in the bottom of the second but the Lovelady defense stepped up to keep them off the board. Addi Monk led off with a double and moved to third on Alyssa Corona’s pop up behind first.

That brought Cali Morris to the plate. She attempted to bunt Monk in from third but missed a LaRue pitch. Womack, who was behind the plate, threw down to Lovell, covering the bag at third. Monk was caught in no man’s land and when Lovell threw back to Womack, the catcher applied the tag to Monk for out number two. LaRue did the rest as she fanned Morris two pitches later.

Martinez led off the top of the third for Lovelady. She had been intentionally walked several times in Game One as well as in her first at-bat in Game Two. In her second at-bat, the Como-Pickton coaches mistakenly instructed Buster to pitch to Martinez.

Two pitches into her plate appearance, Martinez showed why she had been intentionally walked. Buster grooved a pitch down the middle and the Lovelady third baseman’s eyes got big. Martinez launched a towering blast down the left field line that was still climbing when it cleared the fence to put the Lady Lions up 5-0.

Buster managed to retire the next three batters she faced, but when Como-Pickton came in from the field it was clear they were demoralized. Bree Vanginault bunted her way into a 5-3 force at first, Juda Van Rijn struck out and Mackensa Morris grounded out to second to bring the third inning to a close.

A quiet fourth and fifth gave way to the sixth, where the Lady Lions iced the game. Kinzie Seale led off for Lovelady and singled past short. Albinus followed with a bunt single to move Seale to second. Davis was up next and hit into a fielder’s choice at third.

Lovell was next in the batting order and she delivered a triple that rattled around in the left field corner, long enough for Albinus and Davis to cross the dish and make the score 7-0. Prager took her turn in the batter’s box and a dropped third strike allowed her to reach first while it also gave Lovell time to sprint home and extend the Lady Lions’ lead to 8-0.

Martinez followed with a double to left which moved Prager to third and when Womack slapped a shot up the middle, both Prager and Womack crossed the plate to give Lovelady a 10-0 lead.

That was all the Lady Lions would need as LaRue fanned Van Rijn to open the bottom of the sixth but then walked M. Morris. Trying to avoid being run-ruled, the Lady Eagles brought in Sanay Diaz as a courtesy runner for Morris but when she tried to steal second, Womack threw a frozen rope to Lovell who applied the tag for out number two. LaRue got the final out as she fanned Romero to end the game and send the Lady Lions to the Regional Finals.