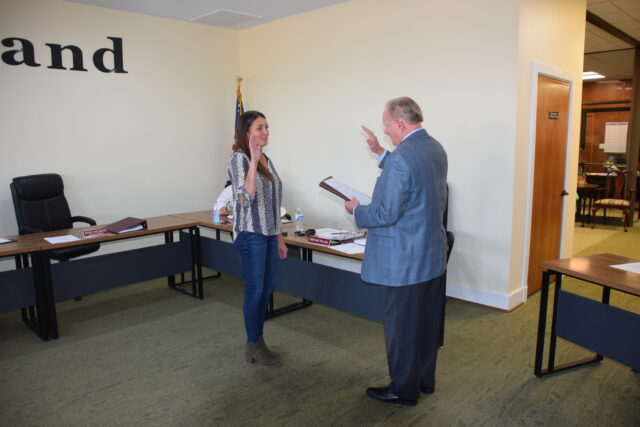 GRAPELAND – The Grapeland City Council met on Tuesday, May 10 in a meeting highlighted by the canvass of votes and the swearing in of the mayor and two council members.

After disposing of several routine matters, Mayor Mitchell Woody requested the council to canvass the votes of May 7 election.

Before the mayor and council members were sworn in, out going Councilman Eddie Childress, who chose not to seek reelection, addressed those in attendance.

“I’ve been in Grapeland since 1992 and served on the (GISD) school board for 18 years, before coming on the council. I believe small-town school boards and city councils are the most important elected positions in our country. I believe we have the voice to control and dictate hoe things happen in our community. I’m not saying the rest of them (governmental entities) are not important, but the role we play locally …”

He went on to say it was his belief that the community should recognize the importance of the council and the work they do in order to keep the city functioning to the best of its ability. Childress also thanked those who elected him and expressed his appreciation towards his fellow council members for their support as well as their service to the municipality.