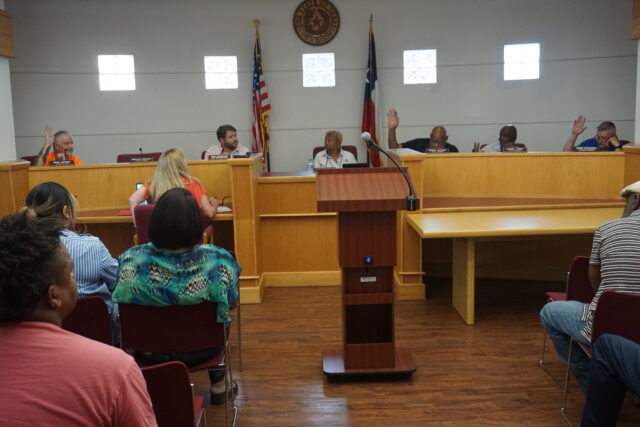 New property tax and water rates were discussed and the CEIDC was again a topic of debate.

The proceedings began with a prayer and the pledge of allegiance. With no comments pending from the public, the council voted to approve the minutes from the previous meeting.

“It has been made clear to the council that our number one priority is to attract and retain our employees,” Angerstein said. “The need is shown by the amount of vacancies that we have, the problems we have in attracting employees to the job. To find quality employees who can do the job we expect of them.”

Angerstein told the council the the city can only control certain parts of their income; namely the utility and property tax rates. The last city budget was a balanced one, however, Angerstein asked the council to approve a higher tax rate in order to bring salaries in line across the city. He pointed out that many of these salaries were set over several years, causing two people with the same job title to earn different salaries in different departments. His goal, he said, is to bring the city into line with other cities similar in size to Crockett. This plan would also apply job criteria for all city jobs which would allow city workers to have clear career paths and detailed plans of how to advance in both the city administration and in their pay rate. Angerstein is seeking an additional $500,000 to cover the plan’s goals.

“I also made some adjustments to our water and sewer rates,” Angerstein explained. “I know the council has been very hesitant to increase these rates along with tax rates. If the council adopts this tax rate then I can implement this plan as it is presented. If the council adopts anything different, I will have to calculate that amount and assign to our employees a lesser amount.”

City of Crockett Mayor Dr. Ianthia Fisher agreed the city should try to bring the city more into line with best practices from other cities.

“I think it just hasn’t been a systematic process,” Dr. Fisher said. “Will we be able to retain the people we need? If you look across the U.S.A. at this point – everybody’s struggling. I don’t care what size town it is. The employees need to be able to see what they can get next, and then they can make a decision on whether to stay or go. If you are working really hard and everyone around you gets a raise except you; then you are not sure what it takes to get to the next step.”

The increase in water as proposed would be an increase of 2% although this was not voted on until the council can consult with the water district. The new property tax would be 68 cents (0.6813) per $100 of appraised property value, up from around 54 cents. This does not include school tax or county tax.

The council voted unanimously to accept the proposed new property tax rate which will next go to a public hearing Friday, Aug. 15 at 6 p.m. in the city council chambers.

The Crockett Economic and Industrial Development Corporation (CEIDC) was a major portion of the meeting agenda. The first order of business was to approve the 2022-2023 fiscal budget for the corporation. This was tabled for the time being as discussion moved on to amending the bylaws of the CEIDC in order for a two-year fiscal audit to take place as approved by the council. CEIDC Executive Director James Gentry, said he it was not CEIDC’s job to pay for a forensic audit. He maintained that since this was a request by the city, the city should pay for it.

After much discussion both by the council and attendees to the meeting, it was voted and approved that the CEIDC should pay for half of the forensic audits and the city of Crockett paying for half.