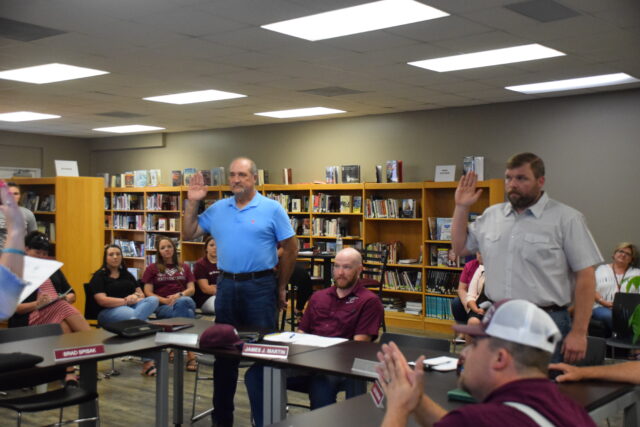 GRAPELAND – The Grapeland Independent School District Board of Trustees will have two new faces at the board table after Tim Howard and Chance Huff were sworn in during a regularly scheduled meeting of the GISD Board held on May 16.

Following the recognition of several outstanding Grapeland High School students, Board VP Brad Spisak called for the canvassing of votes from the May 7 election.

The results for Position Six showed Chance Huff received 280 votes while Travis Lively received 154. The race for Position Seven showed Tim Howard with 216, Nikki Steinsbo with 176 and Katie Streetman with 70.

Melissa Cobb in Position Six and Kendra Huff in Position Seven had both chosen not to seek re-election. They were honored with a token of appreciation for their years of service on the GISD Board.

Once Cobb and Huff left the board room, Howard and Huff were sworn in and took their seats at the board table. The next item of business was the reorganization of the board.

Prior to the swearing-in, several students were recognized for their excellence in education. Grapeland FFA Advisors Gary Graham and Shellee Goolsby recognized the Horse Judging team for their efforts in tying for the Area Championship.

The Homesite and Land Judging teams were also recognized for placing 13th out of 59 teams at the state competition, just missing the National Competition. Wendy Perez was also recognized by Graham for being elected as the Treasurer for the FFA Sam Houston District.

Coach Tyler Terry and the GHS Golf Team were also recognized for making the 2022 UIL Boys State Golf Tournament where they finished ninth in the state. Coach Terry has also been selected as the next GHS Boys’ Basketball Head Coach.

Also in the athletic arena, Cadarian Wiley was recognized for his recent signing with the Lamar Cardinals.

HS Principal Katie Doughty followed and recognized all the seniors who were moving to the collegiate level either at technical school, two-year or four-year university.

Jaycee Graham and Gwen Webb were also given special recognition for receiving their Associate’s Degree while still in high school.