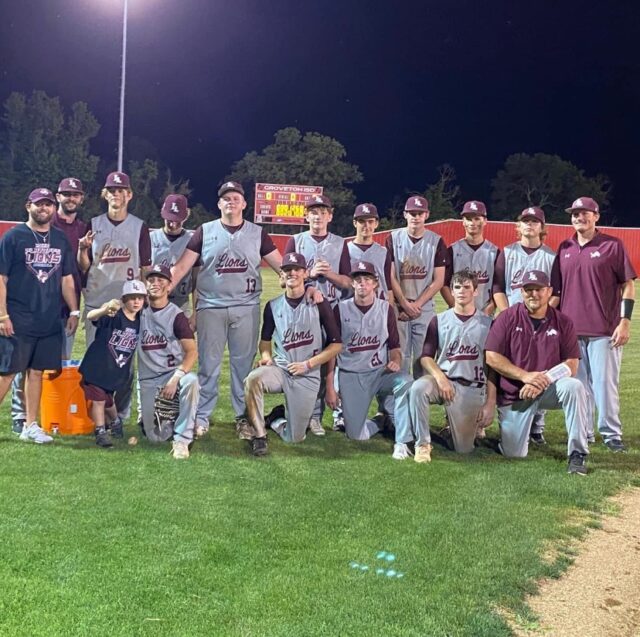 GROVETON – Two long-time rivals, the Lovelady Lions and the Groveton Indians, squared off on the baseball diamond last Friday night in a Bi-District doubleheader to see who would advance to the Area Round of the 2022 Class 2A UIL State Baseball Tournament.

The best-of-three series was originally scheduled to be played in Elkhart but because of weather damage to the Elks’ field earlier in the week, the first two games were shifted to Groveton with game three scheduled for Lovelady, if needed.

As it turned out, a game three wasn’t necessary as the Lions took out the Indians on their home field winning both games, 7-4 and 9-3.

Lovelady jumped ahead early in game one and led 3-0 after the first two innings. Groveton cut the lead to 3-2 in the top of the third but a four-run fifth salted the game away for the Lions as they hung on to win 7-4.

Tyler Gilchrist picked up the win as he went the distance, giving up four runs (two earned) on eight hits. He also struck out three and walked three.

Tanner Steubing took the loss for Groveton. He threw five innings and gave up seven runs on nine hits. He also struck out six and walked two.

Carson Antley led the Indians as he was 2-4 with two RBI while Isaiah Taylor was also 2-4 with one RBI and a run scored.

In the back end of the doubleheader, the Indians seized a 2-0 lead in the bottom of the third inning. The Lions came back in the top of the fourth to cut the margin in half and went ahead by a count of 3-2 in their half of the fifth.

Groveton tied things up at three in the bottom of the frame, but when the Lions came up to bat in the sixth, the lads from Lovelady exploded for six runs to put the game out of reach as they took game two by a final score of 9-3.

Slade Murray picked up the victory with seven innings worth of work. He allowed three runs (two earned) on eight hits, while striking out eight and walking one.

Caleb Coots was saddled with the loss after going 5.1 innings. He gave up eight runs on eight hits, struck out 11 and walked one.

The series win moved the Lions move into the Area Round of the postseason where they will face the Garrison Bulldogs in a one-game playoff. The game is scheduled for Friday evening in Rusk with the first pitch at 7 pm.