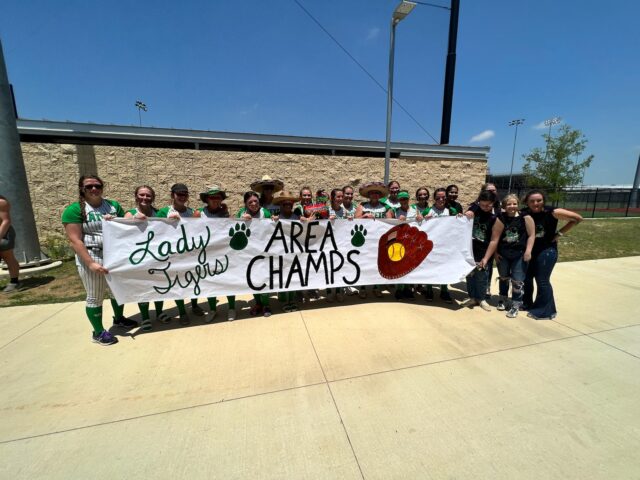 BELTON – The Latexo Lady Tigers hit the road early on Saturday morning as they traveled to Belton to take on the Mason Cowgirls in the Area Round of the 2022 Class 2A UIL Softball Playoffs.

The Lady Tigers came into the game ranked #8 in the latest TGCA poll with a 28-3-1 record and had swept their Bi-District match up against the Snook Lady Blue Jays, 5-0 and 11-2.

The Cowgirls, on the other hand, were unranked and had a record of 16-6-1. Mason had defeated the Thrall Lady Tigers in a one game series, 5-3, to advance to Area.

Latexo sent Lauren Woodard to the circle while Mason called on Tara Bolley. Both pitchers were on point in the first two innings as the only base runners reached on infield errors. For the Cowgirls, Kamryn Loeffler made it to second on an error at third, but when she tried to stretch it, she was gunned down at the hot corner.

The Lady Tigers’ Natalie Nicol also reached on an error at third and made it to second on the play. She was stranded there, however, when Mally Moore popped up to left for the third out.

The second inning saw Woodard jam Avery Brooks into hitting a soft liner to short to lead off the frame. She then struck out Mady Williams, but gave up a single to Bolley. The Cowgirls’ pitcher was stranded at first, though, when Woodard fanned Ellie Whittle on three consecutive pitches.

Bolley was equally as effective in the bottom half of the inning. After walking Baylee Omelina, she got Cammy Parrish to ground into a fielder’s choice at second. Taylor Dise was up next and flew out to left, but Woodard followed in the batting order with a single to move Parrish to second. That was as far as the Lady Tigers would get, however, as the Cowgirls’ third baseman made a terrific catch on a Marissa Allison liner that had RBI written all over it.

It looked like Mason might have gained a little momentum with the play at third, but Woodard put a quick end to that as she struck out Jacie Smedley and Saylor Elliott for two quick outs. She gave up a seeing-eye single to Loeffler who stole second with Tori Perlichek at the plate. Woodard maintained her composure though, as she coaxed a grounder back to the circle from Perlichek to retire the side.

When Mason took the field in the bottom of the third, the wheels came off of the Cowgirls’ wagon. Latexo scored five runs before the first out, and by the time the third out was made, Mason was staring up at a 10-0 deficit.

Charlee Biano led off the Lady Tigers’ at-bat with a double and came around to score on Katy Allen’s single to center. Nicol drew a walk and moved to third when Moore doubled in Allen. Omelina drew a walk and when a Parrish grounder was booted for an error, Nicol crossed the plate to make the score 3-0.

With the bases loaded, Dise settled into the batters’ box and on a 1-0 pitch she drove a pitch into left to bring in Moore from third. Woodard was up next and hit into a 6-5 force at third, however, on the play, Kaitlyn Carraza – who came in as a courtesy runner for Omelina – crossed the plate to make the score 5-0.

Allison was up next and hit a deep fly ball that allowed Dise to tag up and score while Natalie Smith – who came in to run for Woodard – moved to third.

That brought the top of the order back up to bat and this time Biano reached on an infield error which allowed Smith to scamper home. The speedy lead-off hitter stole second, swiped third and when Allen hit a grounder that was misplayed, Biano trotted home to make the score 8-0.

Nicol singled to move Allen to third and when Moore slapped a shot to third that was mishandled, both Allen and Nicol crossed the dish to make it 10-0.

Woodard picked up the win in five innings. She didn’t allow a run, gave up only five hits and struck out nine. Bolley took the loss as she pitched four innings and gave up 11 runs (four earned) on seven hits. She also walked five.

Kamryn Loeffler paced the Cowgirls as she was 2-3 at the dish.

The Lady Tigers’ win moves them into the Regional Quarterfinals where they will face the Thorndale Lady Bulldogs. Game one is scheduled for Thursday, May 12 in Madisonville. The opening pitch is slated for 5 pm. Game two is scheduled to be played in Mumford on Friday, May 13 and will begin at 7 pm. If needed, game three will be held on Saturday in Madisonville at 5 pm.