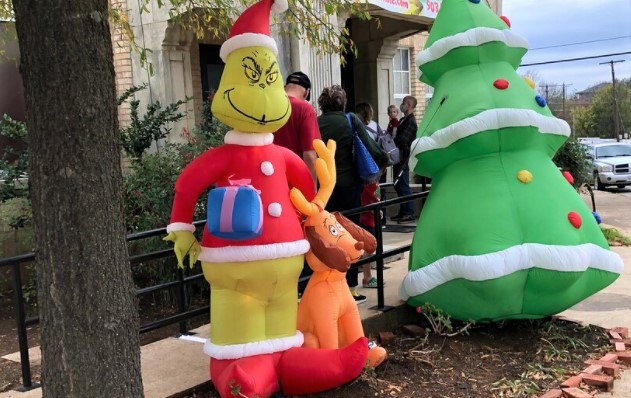 PALESTINE – He’s grouchy. He’s stinky. He’s furry. He’s also back in East Texas. The Grinch’s Lair is open once again in Palestine for the ninth year in a row and offers kids and adults of all ages a chance to have a little “Grinch” fun in Whoville while celebrating the holiday season.

According to event organizer Jeremy Janz, The Grinch’s Lair is an evolving experience. “We try to refine each and every year something different – a new experience.”

The Grinch’s Lair opened on November 19 and will continue to be open on weekends, Fridays, Saturdays and Sundays, through December 19 from noon until 6 p.m.

The Grinch welcomes the young and the young at heart to visit him at his home, where he is locked up for stealing Christmas at the historic Texas Jail House venue located on the square in downtown Palestine.

Based on the beloved children’s story by Dr. Seuss, “How the Grinch Stole Christmas,” the reclusive, grouchy, green, furry creature named the Grinch wants to put an end to Christmas by stealing presents from the nearby town Whoville on Christmas Eve. But meeting an innocent little girl named Cindy Lou Who begins to melt his heart, which started two times smaller than the normal heart but grew ten times bigger. After watching the Whoville residents joyously celebrate Christmas even without the gifts he stole, makes the Grinch realize that maybe there is something more to Christmas than just presents (or commercialism).

“Ultimately, even the Grinch can’t hide from the fact that he got it wrong. Love, sharing and giving changes his heart,” Janz said. “It’s so funny that it takes a Grinch to show everybody else that maybe Christmas isn’t about all those things. It’s about loving each other, spreading joy, visiting with each other.”

The Grinch’s Lair brings the whimsical town of Whoville to life with a myriad of Whoville characters, complete with their distinctive facial features and fashion, but starts with a journey up to the Grinch’s home in the Mount Krumpet Cave.

“You can stop at the Grinch’s home on the second floor or continue up to the third floor to visit with the Whoville Whos and write a letter to Santa,” Janz said. “We also have Max’s cooking show, interactive chalk walls inside the jail cells where they can sign their names and draw pictures. We have a scavenger hunt they can participate in. We have the Grinch, of course, and his jokes, and you can explore his rooms and his attractions.”

Perfect photo –op spots are plentiful in the Grinch’s Lair.

“We tried to provide a lot of photogenic moments and create spaces and elements where people could pause with the Grinch and take different pictures,” Janz said.

Many out-of-towners have found the Grinch’s Lair while visiting the Palestine area for the Texas State Railroad’s Polar Express™ rides – but according to Janz – the Grinch’s Lair is becoming a destination stop on its own right.

“It’s the perfect complement to the Polar Express™, especially in your jammies. We’ve had a lot of people from Dallas and Houston especially,” Janz said.

What makes the event even more unique is the venue – the Texas Jail House, built in 1931, was once used as a county jail and juvenile detention center. When Janz purchased the three-story brick building in 2012, he envisioned turning the location into a place where its historic elements such as jail cells and bunks could contribute to the atmosphere of its events.

The Grinch’s Lair would not exist without the help of many volunteers who bring the event to life.

“I want to say thank you to all of our volunteers who give of their time to make this be successful. Some of our volunteers do it because they don’t have family in the area, and they want to get involved in something at Christmas. Others do it because they enjoy doing theatrical things or sharing history,” Janz said. “It gives them the opportunity to share their passion for the arts or history.”

The Grinch’s Lair shapes up to be a fun, interactive event for everyone who attends.

“There are not many places where you get to interact with the main character. If you get to visit with Santa, it’s for 30 seconds or a minute,” Janz said. “But at the Grinch’s Lair, it’s more like a live interactive theater. Even if someone is not sure about the Grinch, like small kids, that’s okay. They always end up having fun and laughing.”

As The Grinch would say, “Personally I think it’s better than a garlic sandwich!”

Admission to the Grinch’s Lair is $12 (ages 2 and under free). Hours are from noon to 6 p.m. Friday, Saturday and Sunday through Dec. 19. Free hot chocolate also is provided.

The Grinch’s Lair is located at 704 Avenue A in Palestine. For more information about the Grinch’s Lair, call 903-480-0212 or visit www.texasjailhouse.com.