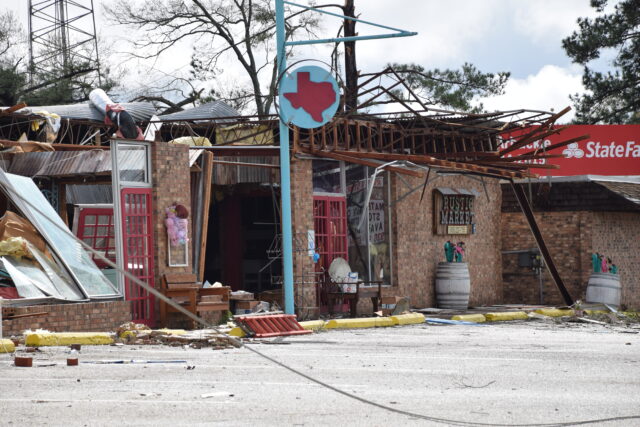 HOUSTON COUNTY – Storms ripped through the East Texas area on Monday evening and brought with them a tornado that touched down in several parts of Houston County.

The Austonio area west of Crockett, locations along FM 2022 and the Norman Lane subdivision on the north side of Crockett appear to be the hardest hit. At least three people from the Austonio area were hospitalized with injuries related to the storm and reports indicate one man may have lost his arm.

Along FM 2022, which runs between Crockett and Slocum, a cell phone tower was destroyed and a steel power pole was snapped off at its base.

In the Norman Lane/Hwy. 287 area, a strip shopping center which housed – among other businesses – a Bigs convenience store, Rustic Market and ironically a State Farm Insurance Agency, was destroyed. Several residences along Norman Lane, which runs along the north side of the shopping center, were obliterated. The AAA Storage facility was also heavily damaged.

A preliminary report from the National Weather Service indicated the tornado that touched down has been classified as an EF-2, however, that could change once a final report has been issued.

According to the National Weather Service (NWS), on the Enhanced Fujita (EF) scale, an EF-2 tornado is characterized as strong, with wind speeds between 113-157 mph, which causes considerable damage.

“Roofs are torn from frame houses, mobile homes may be demolished, boxcars can be pushed over, large trees may be snapped or uprooted and light objects become projectiles,” the NWS website stated.

Ansel Bradshaw, a resident of Norman Lane, said he estimated the tornado tore through the area at approximately 10:45 pm.

“(Wife) Brenda (Bradshaw), the dog and the cat got into one of the bathrooms. It sounded like a freight train. Our ears started popping and ringing. That lasted for about 25-30 seconds and then it was over. I stepped outside after that and I saw our driveway was completely covered with debris,” he said.

Bradshaw added, “The City of Crockett worked until about 3:30 am this morning and hats off to those guys. They did an unbelievable job. This whole street – in order to walk down the street – you had to crawl between trees and watch out for power lines.”

He went on to say he understood two people were trapped in the first house leading into the neighborhood but the Crockett Fire Department was able to rescue them.

“All-in-all, we got lucky. If you look at our house, it looks like it went around it. A storage building in the back of our house was damaged. The wooden fence was knocked down and on Brenda’s car, driver’s side window was busted. There has been an out pouring of support from all over. A chaplain came down the street earlier this morning with fresh coffee,” he said.

Crockett City Administrator John Angerstein was also at the Norman Lane location to survey the damage. He said the city first began to receive reports of damage between 11 pm and midnight.

“Keeping up with the hospital, we have had a fair number of people come in as patients with injuries related to the storm. A couple were critical but to the best of my knowledge, there have been no casualties,” he said.

Prior to the storms reaching Houston County, the city had opened up the Crockett Civic Center as a shelter for anyone who needed to seek refuge.

“At this point, a tornado is one of the most impactful weather events. Unless you have a storm shelter, there is really not much you can do. This is where it decided to touch down. All of our crews were prepared. We had all of the equipment we needed, chainsaws and people lined up and ready to go, if it did hit our town. When it did, we mobilized to this location. We pushed trees out of the way and got people out their houses. We transported them to hospitals or to other family members. It went as smoothly as it could go in this type of emergency,” Angerstein said.