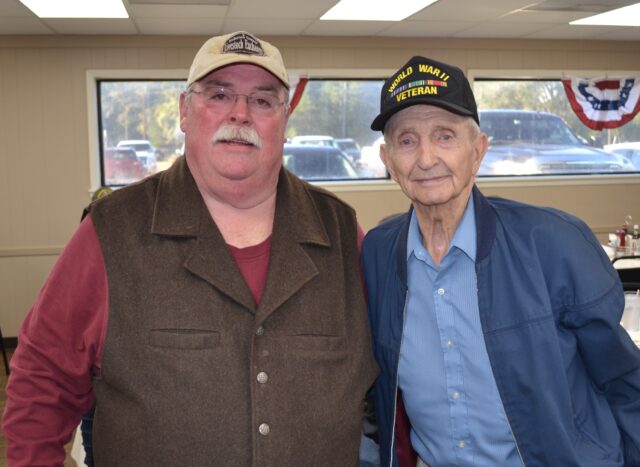 ELKHART – The alarm clock rang a little earlier than usual this morning. Late yesterday afternoon I was given the directive to be at Stockmans Café in Elkhart to cover a breakfast for veterans. “Absolutely” was my reply. I sort of backed into the assignment. My esteemed colleague, Will Johnson, would have been glad to cover the event, but he was going to have a late night covering playoff volleyball and thought it would be easier for me to make it on time.

In my brain I thought I’d be covering a breakfast for Veterans Day. That’s a great gesture by anyone who would go out of their way to honor those who served, and is greatly appreciated by the veterans who attend. I had no idea that this was so much more.

When I arrived at the Stockmans Café I was greeted by several waitresses, none of whom looked like they were toiling through a day’s work. They looked like they were having the time of their lives and genuinely excited to be serving breakfast to the men and women in attendance. “Are you here for the Veterans breakfast?” I was asked with a smile. “Well, I’m here to take pictures and write it up for the newspaper,” I replied. “That’s great! Are you a veteran?” she asked. “Yes ma’am.” “Well then you get to do both!”

I was ushered to a seat. I had assumed that there was probably a special menu just for the occasion. Perhaps something a little easier to prepare on a large scale. I was wrong. The young ladies serving tables were taking custom breakfast orders from the full breakfast menu. I chatted briefly with several veterans around me until my eggs, sausage, hash browns and massive fluffy biscuit arrived…

I ate a perfect breakfast and stood up to snap a few pictures and visit a few people. I walked over to Stockmans owner Kirk Smith to get the lowdown. “There are a few new faces here this morning, but a lot of these veterans are regulars,” said Smith. I looked a little puzzled and asked “you mean they come every Veterans Day?”

“Oh no… we do this every month. The first Friday of every month we serve breakfast to honor these veterans,” said Smith. “Breakfast starts at 8:30, but if you wait until then to get here, you probably won’t find a seat!”

Rest assured, Kirk Smith is not the kind of guy who wants to be patted on the back or shoved into the limelight. He does things like this without a second thought. During last year’s pandemic, the Stockmans served breakfast to Elkhart ISD students free of charge during a time where businesses were wondering if they would survive. This is simply the sort of thing he does.

Two young ladies approached the counter to pay their tab. “It’s on the house ladies,” Smith said. “But we’re not veterans…” they replied. “Well… do you love veterans?”

You can see how this turned out.

This day, and every first Friday, much like Veterans Day itself, does not belong to Veterans. It’s a day to honor Veterans. And the crew at Stockmans is very good at doing so.

“I’ve worked every first Friday breakfast for a year and a half,” said waitress Hailey Meador. “It’s my favorite day to be here. We all love doing this so much.”

It showed. Nobody was in work mode. Everybody looked as if they couldn’t wait to take another order or bring out another plate. I was taken aback by how much everybody was enjoying themselves.

The veterans in attendance were in top form as well. They represented several different wars and conflicts. Many wore hats or shirts depicting their various divisions. There were Marines, Sailors, Airmen and Soldiers. Cavalry, Armored, Medics, Airborne, Seabees, Rangers, Air Assault… all and more were represented.

I had the pleasure of visiting with Mr. Willard Stallings, the lone representative of World War II in attendance. He served in the Army as an infantryman in the South Pacific from 1945 to 1948. Ladies and gentlemen, that was 76 years ago. Once I had done the rough math in my head, I realized what an absolute rare honor it was for me to stand there with him. He should have been separated from me by a velvet rope and then ushered to a waiting limousine that would take him back to his home in Jacksonville. He should have rock star status. Mr. Stallings is, however, not a rock star, but a genuinely warm and unassuming gentleman who was more than a little emotional over the attention he’d been given during the event. I’m pretty sure a velvet rope would not work for him. I thanked him for his service. He returned the thanks and I got a hug. It was a big moment for me.

Everybody walked away with more than a great breakfast. Those amazing waitresses held a raffle at the end of the morning and many in attendance won prizes. Every veteran in attendance was also given a commemorative coin by the staff at Stockmans. Sponsors for this month’s raffle included Liberty Church, Ranch Brand Meat Value Paks, Scott Johnson, Rattlesnake Ranch Pecans, Just Debbs/Warren’s Barber Shop, Humana, Firehouse Ice Cream, 5 Enterprises and Eilenbergers.

The First Friday Veterans Breakfast is a thing of beauty. The warm reception and service is fantastic, and the enjoyment and appreciation evident on the faces of a roomful of Veterans makes it a truly wonderful event.

Union Pacific, Political Leaders Scheduled to Meet
Fitness and Finances: How to Improve in 2018
National Nutrition Month Observed Throughout March