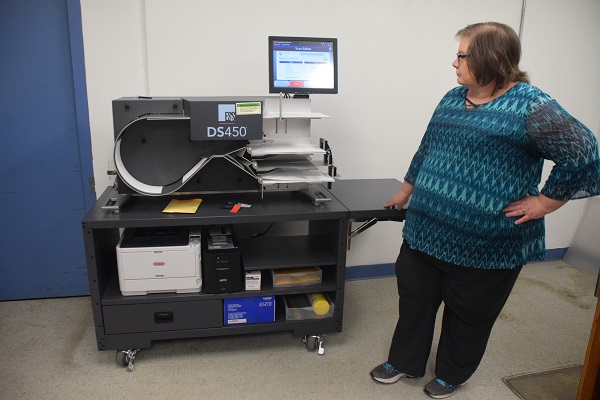 HOUSTON COUNTY – When money was made available to local governments to tighten their election security and upgrade their voter tabulation machinery, Houston County applied for a grant and through the efforts of county officials, the county was fortunate enough to have been awarded said grant.

On Thursday, Oct. 7, Houston County Elections Administrator Cynthia Lum held a public test on the county’s newest voting machines and discussed how they worked, as well as how they came to reside in the oldest county in Texas.

“What we have here,” Lum said as she gestured toward a machine, “is our new, central tabulation machine. It is a DS 450 and it’s manufactured by ES&S (Elections Systems and Software) out of Nebraska. They are the same vendor we had before. Our last machine, even though it was a workhorse, was 15 -years-old. This is going to replace that. It’s running smoothly and we haven’t had any issues with it.”

As to how Houston County acquired the new voter technology, Lum explained the county did a security assessment, in conjunction with the Texas Secretary of State.

She said the county used the vendor used by the SOS “… and they went over our storage facility, how we do the elections, where we store everything – how secure are we? They gave us a rating and did this for every county in the state. Because we did that assessment, we were awarded a grant by HAVA which is the Help America Vote Act. That grant was $120,000. With that $120,000 grant, plus additional money from the county, we were able to purchase the central counting machine and one ADA compliant machine for every precinct in this county. That’s 22 machines.”

Asked about the county’s rating, the elections administrator said she didn’t recall the specific number but added it was around a 2 on a 0-5 scale.

“There were only one or two minor things. Our security was great. We never had a problem with our security. The policies and procedures were great. They just wanted us to write all of those down and that is where we are at on this machine. We are trying to write down what our policies and procedures are going to be before election night,” she said.

In recent years, election night results have taken longer than normal in Houston County. Lum said the goal with the new equipment and software is to get the results out in a more-timely fashion.

“This is going to be our first election (Nov. 2), so we won’t have any issues when the primaries occur (in 2022). There are eight items on the constitutional amendment election this time. The turnout for constitutionals is normally lower than average. Although 2019 was a record for us, we did not even have 3,000 people. We’re hoping to get 3,000 or maybe more, since people seem to be coming out more to vote, based off of 2020,” she said.

Lum added the machines use military-grade codes and the codes are changed after every election to help with security.

“These are very simple to use,” Lum continued. “The people who have tried it out, have loved it. During early voting, we will only use these machines to vote on. On election day, you will have the option to use these machines which are marking devices. It does not record. It marks your ballot only. On election day, you will have a choice of the machine or a regular ballot, until those regular ballots run out. Then it is only the machine.”