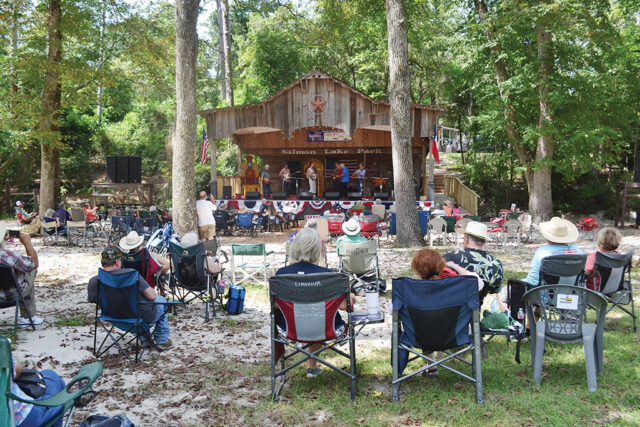 GRAPELAND – For most people, the list of things that are inevitable consists of only two items, neither of which simultaneously appear on lists such as “things to look forward to” or “my favorite things.” Fortunately for east Texans, Salmon Lake Park long ago added to the list of things that can be counted on, and it’s far more enjoyable than those other two.

This past Labor Day Weekend saw the park host the 45th annual Bluegrass Festival, and by all accounts it was a great success.

“This year’s crowd was probably double what we saw last year” said owner Bethany Owens. “We were very happy with the turnout.

This year’s event saw Salmon Lake Park add two extra days to the festival, as well as kicking off festivities three hours earlier each day than in years past. “We started the entertainment every day at 1:00 instead of at 4:00,” Owens said.

This allowed more time slots for more artists and more sets. Artists also held multiple workshops for attendees which were well-received. Talent for the event was both national as well as local, with artists from as far away as Georgia and Kentucky as well as several local east Texas groups.

The event wasn’t without challenges. Two groups had to cancel due to COVID-related illnesses, and one group was unfortunately sidelined due to damage from Hurricane Ida. The event was unfazed, however, as alternate acts were available to fill the empty spots.

Salmon Lake was still reeling from the heavy rains earlier in the year that broke the dam and damaged a measurable portion of the park.

“We have been so blessed to have been in this community,” Owens said. “So many local people stepped up to help, not the least of which were Jason and Brandon Bridges, who were responsible for repairing the dam and refilling the lake.”

Owens continued, “At first, we thought the stage was intact, but after we were able to inspect it we found out otherwise.”

According to Owens, many people helped to clean up the park and rebuild the stage before this year’s event, including locals as well as members of the Bluegrass community.

“I grew up in a much larger community. To have this town and the surrounding areas come together to give their time and support really drove home the fact that we were so blessed to find our home here,” she said.

While the annual festival is certainly a staple event for east Texas, Salmon Lake Park offers an amazing experience for families year-round. RV and tent camping spots are available as well as cabin rentals and facilities to host your event. Contact them at info@salmonlakepark.com or call (936) 687-2594.

Jason Jones may be reached at jjones@messenger-news.com.