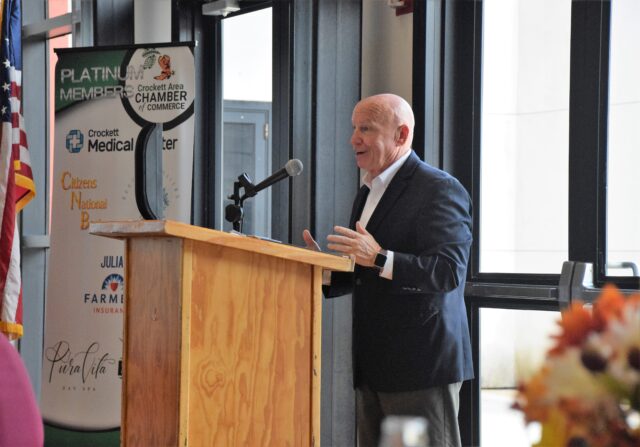 CROCKETT – U.S. Representative Kevin Brady took the floor Thursday at the Crockett Civic Center to address his thoughts and concerns regarding upcoming legislature and recent trends in Washington.

A diverse and largely receptive crowd of local elected officials, as well as concerned citizens, greeted Congressman Brady during the town hall meeting. Crockett Area Chamber of Commerce Director, Liza Clark, welcomed the crowd, and turned the floor over to Brady.

Brady graciously thanked the crowd for attending and spoke highly of his past experiences working with officials, businesses and families from Houston County.

“Aren’t you glad we live in Texas?” Congressman Brady asked a crowd in full agreement.

He went on to talk about the many ways that Texas has led the country in recovering from the massive shutdowns which have crippled so much of the country over the past year.

“We lost millions of businesses all over the country, and many are just now being allowed to reopen,” Brady said. “We lost some good ones here, but we found a way to move forward.”

Brady also mentioned that many places around the country are still debating over whether to open their schools, but quickly added, “In Texas, we’re open for business.”

The congressman went on to talk about 2021 being a time of recovery from the events of 2020, and while much is going well, he said that there are still red flags, including misleading job growth numbers. Brady stated that 4 out of 10 people without jobs are being paid more to stay home than to go back to work. Texas, however, is one of 26 states which is seeing a decrease in unemployment.

He then shifted his focus to the infrastructure bill recently passed by the senate.

“There are some things that look good – provisions for roads, bridges, airports, water and sewer, and broadband, which we so desperately need,” Brady said. “But much of it goes in the other direction, and the bill is not paid for. In the House, the Speaker of the House has announced that she is going to tie this infrastructure bill to that $3.5 trillion tax hike spending bill.”

Brady explained that while the infrastructure bill would be useful, the tax hike bill would ultimately end up costing far more jobs than it would create.

As Brady continued, he provided a list of moderates who could swing the vote on the infrastructure bill, and urged the business community to reach out to them on behalf of small business owners who would be negatively affected by the bill’s passing in conjunction with the tax hike spending bill.

Brady also addressed the oil and gas sector and the 2022 budget provisions that would negatively affect them, including: