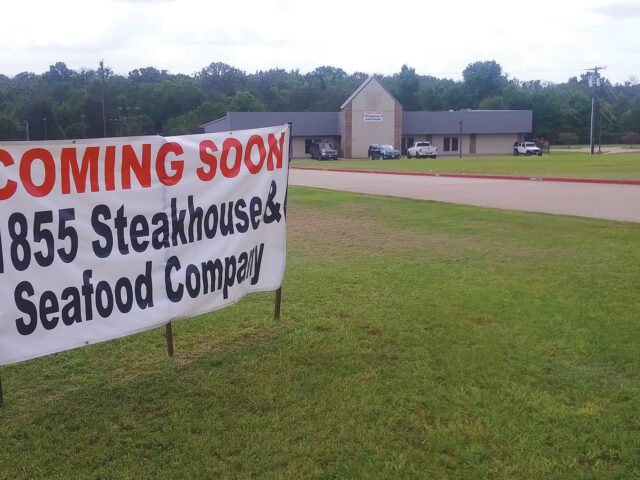 PALESTINE – Folks in East Texas who have been searching for that upscale experience for steak, seafood and the works will soon find the end of the rainbow.

Owner Kirk Smith and Executive Chef/General Manager Scott Bullock recently sat down to talk about the direction they intend to take with their new venture.

“1855 will be opening the first week in August. It’s an upscale steakhouse, seafood, a few pasta dishes, mainly upscale dining.” said Smith. “We’ll have outdoor patio, and then in September or October we’re converting the area out back into an outdoor concert area and have concerts several times a month. We will be putting up tents where the go kart track used to be so you can sit under there during concerts, and the building out back will be converted to an icehouse with a full bar.”

If the “go kart” line threw you off the trail, don’t let it. 1855 Steakhouse will be opening at the location of the former Dogwood Junction in Palestine, next to the Dogwood 6 movie theater on Palestine Avenue.

When asked about his specialties, Executive Chef Scott Bullock was quick to mention his three rib, cherry smoked pork chop. “It may be the best piece of meat you’ve ever put in your mouth.”

Bullock is not new to the Executive Chef position, having opened restaurants for the W and Gaylord Hotels as well as a Hilton in the Dallas area. His knowledge of the ingredients and product are well established.

When asked how he went about becoming a fine dining chef, Bullock answered “Well, I lied on an application and began making pizzas when I was 14. Later it was on to Taco Bell. This was back when they all made their own ingredients. Pretty soon I was opening the W.”

As with any steakhouse, the steaks will be the star.

“Our beef is aged – the Ribeyes are wet aged 45 days and the Strips and Filets are wet aged 30 days before being shipped to us. It’s literally the finest piece of meat you can find. And that meat is specially prepared for us.”

And when that steak arrives at the 1855, Chef Bullock will specially prepare it for the masses in a state-of-the-art flame grill. “This grill sears both sides of the steak simultaneously at 1800 degrees. We will be able to cook a lot of steaks all at once.”

When asked what made him move forward with this venture, Smith gave what may be the perfect answer; “I love steak and I’m a cattle rancher.”

It doesn’t get any more cut and dried than that. Until he added “It’s a cold hard fact that the west wasn’t won on salad.”

While the 1855 will be new to the culinary landscape of Palestine, Smith is no stranger to East Texas eats. He is also the owner of the popular Stockman’s Café, located at the Anderson County Livestock Exchange in Elkhart. Executive Chef Christi Wilson is in charge of a more upscale menu of classic country cuisine, and word on the street is that the Pork Ribeye is “to die for.”

The first week in August is the target for opening of the 1855 Steakhouse at 555 Palestine Avenue in Palestine. Your appetite will need to be on its “A” game.