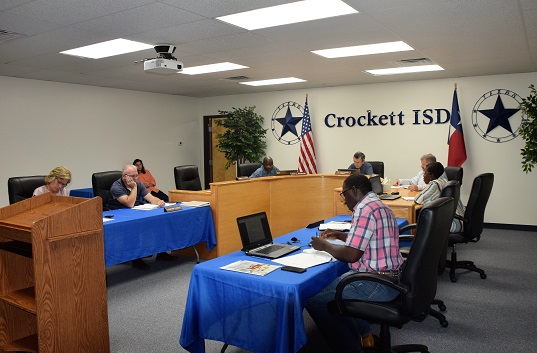 CROCKETT – While the students may be out for the summer, the business of running a school district is a year-round task as evidenced by the Crockett Independent School District Board of Trustees meeting held on Monday, June 28.

As the meeting got underway, the floor was opened for a public forum. The first person to speak was a parent who voiced her displeasure over the way she believed the district handled disciplinary action pertaining to her child.

The next person was local businessman John Jenkins who expressed his belief an auto mechanics vocational program should be established in the former state school facilities.

By policy, the trustees are not allowed to respond to matters brought up in the forum.

“This is an agreement we have had in place for several years which allows Head Start to operate in conjunction with our Pre-K program at our campus. It does offer the parents of students enrolled in both some extra benefits,” he said.

The agenda item was unanimously approved.

Next on the agenda was a second MOU item. This, however, pertained to an MOU between the district and the Crockett Police Department.

“Again, this is an item we have had in place for a couple of years now – just approving an agreement with our city police department to have an officer here during school hours on our campuses,” Emerich said.

The agenda item was unanimously approved.

The board then retired into executive session at 6:15 pm. They emerged from behind closed doors three hours later and the first item addressed after the three-hour executive session was an agreement between the district and Treehouse Academy. The measure was tabled until the next meeting.

Emerich explained the agreement was to have some type of daycare arrangement which would benefit CISD employees. He added he would be speaking with the daycare facility in the very near future.

The board also tabled a revised sale agreement regarding the Juvenile Justice Center Property.

“We are looking at some proposals for that. We didn’t feel like that was something we wanted to do right now. The sale is currently going on exactly as it was in the past,” he explained.

The trustees also gave their approval to the 2021-2022 compensation plan.

“We spent a lot of time and effort on this,” Emerich said. “We think this is a fair thing going forward and this is something we can afford – the raises in the compensation plan this year.”

The plan would effectively give all teachers a two percent raise and a one percent raise to all other pay grades as well as job classifications.

Board President Dr. John Garner added, “We support our personnel. We appreciate them very much and we want to reward them. We think this makes us very competitive.”

The 2021-2022 compensation plan was unanimously approved.

The retirements/resignations/terminations of the following CISD personnel were also approved by the Board of Trustees: