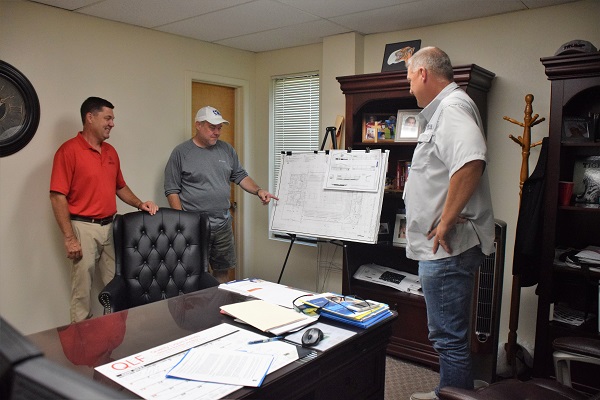 LATEXO – The final plans have been approved and the construction of the new facilities at Latexo ISD is expected to begin during the first part of August.

“This started during a conversation with the board,” Latexo ISD Superintendent Michael Woodard said. “We started talking about a multi-purpose facility and the timing was perfect. It was all about the financing and we wound up passing a bond. The elementary bond was paid off this year, which was huge for us. We were able to keep the tax rate where it was at and that was a big selling point. After several meetings and communications with the taxpayers, the bond passed pretty easily.”

LISD Board President Kelly Nicol added, “Our school is expanding due to the education kids are getting. If you look out there on the highway (US 287), you see the state championships in UIL, mathematics, current events and public speaking – a lot of people are coming to our school. We are having to build and expand.”

The construction firm of Berry and Clay was chosen to build the new multi-use facility (gym) as well as the new cafeteria at the elementary school, Berry and Clay Vice President Stephen Berry said.

“I think this will be the 12th or 13th competition gym we have built in the last 10 years,” he said.

Some of their more recent projects include Slocum ISD’s High School and the Grapeland Elementary School.

“We came over and had a couple of facility meetings with the board. It was really (architectural firm) Goodwin, Lasiter, Strong who came over and started the design phase. They met with coaches, staff and the board to put together the best design. It was moved a couple of times and then the district found what they believe is the best spot. Once that floor plan was approved, they went into the design phase. That took about three months to get it to where it is today which is format ready for bidding. Now that we received the bid documents this morning (Thursday, June 24), we have already got the documents out to virtual rooms.,” Berry said.

He explained these virtual rooms allowed subcontractors to download the plans, see what is being bid on and begin making contact with those who were interested in building their piece of the facilities.

Bids for the various areas of the project are open now and the bidding process will close on July 28.

“What we will do after the bidding closes is get a guaranteed maximum price, meet with the school, get it approved and then start usually about two weeks afterwards – but with school starting so early this year we are going to get some fences up and have a ribbon cutting, whether it be the first day of school or something shortly thereafter. It is always an exciting thing. By the time school starts, we want to have some (bull) dozers on site,” Berry said.

The construction will take approximately 13 months to complete, Berry estimated, and the facility should be finished by the start of the 2022-2023 school year.

“That’s if we don’t have snows and three months of rain,” he laughed.