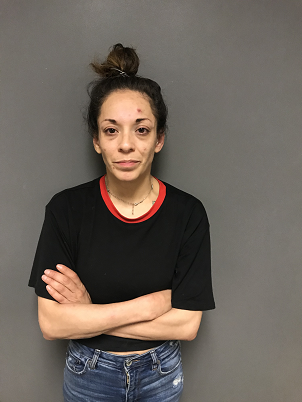 PALESTINE – Sometimes people simply don’t want you on their property. In the 2008 movie “Gran Torino,” Clint Eastwood utters the famous line, “Get off my lawn!” to a bunch of kids who were bullying another kid.

While there was no bullying going on, the spirit of “get off my lawn” was in the air last Sunday, May 29 when officers with the Palestine Police Department were dispatched to the 1200 block of N. Link Street, in reference to a criminal trespassing complaint.

According to Palestine Police Department PIO/Community Liaison Michele Herbert, “Officers arrived at the location and observed that the front door of the residence had been damaged and was open.”

After entering the residence, PPD Officers located Crystal Gonzales, 36, of Palestine, hiding in a closet in the back of the abode.

Gonzales was taken into custody and while the officers were conducting their investigation, it was learned that she was wanted on multiple warrants out of the Palestine Municipal Court.

Gonzales was placed under arrest and transported to the Anderson County Jail where she was booked in on six warrants from the municipal court, along with a charge of the manufacture/delivery of a controlled substance, penalty group one, in an amount greater than four grams but less than 200 grams. She was also charged with criminal trespass of a habitation.

“I am proud of the work these officers do in getting drugs and offenders off the streets in our community.” Captain Jamie Lester said.