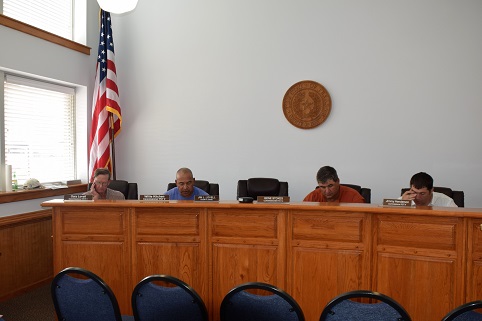 HOUSTON COUNTY – Following the torrential rains over the Memorial Day Holiday, a Disaster Declaration has been issued for Houston County.

The Disaster Declaration was approved during an emergency meeting of the Houston County Commissioners Court held on Thursday afternoon, June 3.

Precinct Two Commissioner Willie Kitchen facilitated the meeting in the absence of County Judge Jim Lovell, who had a prior commitment, and opened the proceedings at 1:30 pm.

After welcoming those in attendance, Commissioner Kitchen said the first order of business would be to receive as information the Disaster Declaration issued by Judge Lovell on June 2.

However, the commissioner said, Precinct One Commissioner Gary Lovell had requested the declaration be retroactive until late April or early May.

After a few minutes of discussion, the disaster declaration was approved.

“Whereas, on June 2, the Houston County Judge issued a proclamation declaring a state of disaster for the County of Houston, resulting from excessive rainfall beginning May 31 (now April 29), which caused flood damage to streets, roadways and drainage infrastructure.

“Whereas, the conditions necessitating declaration of a state of disaster continue to exist; and

“Whereas, Section 418.108 of the Texas Disaster Act of 1975, as amended, Vernon’s Texas Codes Annotated, Government Code Chapter 418, provides that a local state of disaster may not be continued for a period in excess of seven days without the consent of the governing body of a political subdivision;

“Now therefore, be it ordained by the Commissioners Court of Houston County, Texas:

Section 1 – That the state of disaster proclaimed for the County of Houston by the Houston County Judge on June 2 (now April 29) shall continue until July 2 or until terminated by order of the Commissioners Court.

Section 2 – That this Order shall take effect immediately from and after its passage and publication, and it is accordingly so ordained.”

The issuance of a local or state disaster declaration allows public officials to exercise emergency powers to preserve life, property, and public health following a disaster as indicated in the Texas Government Code Chapter 418. Most often, declarations are sought so that federal financial assistance can be obtained for individuals, local and state jurisdictions in an impacted area once certain fiscal thresholds are reached.

In other matters brought before the court, the commissioners gave their approval for emergency purchasing to repair a bridge on CR 2126, located in Precinct One, in order to protect the health and safety of residents.