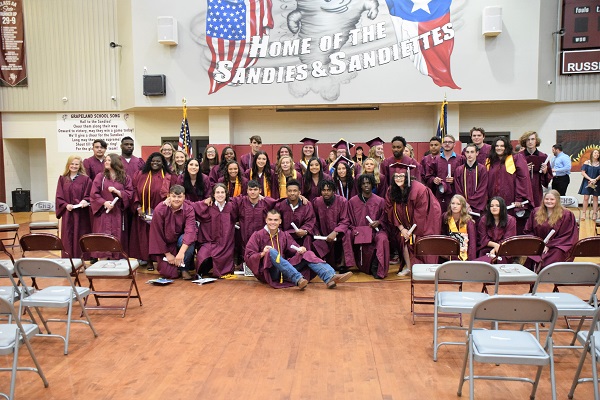 GRAPELAND – The number of Grapeland High School alumni increased Friday evening, May 28 when 41 GHS Seniors sauntered across the stage, received their high school diplomas and embarked on the next phase of their lives.

As the clock struck 7 p.m., the sounds of “Pomp and Circumstance” filled the Grapeland Gymnasium as the first smiling seniors made their last walk as students at GHS.

Once the graduating seniors settled into their seats, Christi Shepherd assumed the podium and welcomed those in attendance. Hannah Kate Vance followed her to the lectern and provided the ceremony’s invocation.

Following the opening prayer, Jason Bobbitt and Tori Woodford led the pledges to the American and Texas flags, respectively.

Once the pledges had been given, an emotional rendition of “The Star-Spangled Banner” was provided by Arionna Davis. As the last notes of the National Anthem began to fade, Kaylee Francis took the stage to pay tribute to the parents of the graduating seniors.

The end of the tribute brought the first GHS Co-Salutatorian – Stacy Perez-Maldonado – to the speaker’s dais.

The second Co-Salutatorian, Mary Jane Watson, was the next to speak.

She added, “As we begin this next phase of our lives, never forget the times we shared together. So for the Class of 2021, I challenge you to continue your journey of learning, build on what you have done here and become the best version of yourselves. There is no pre-determined way to do that. It is for you to find out and I wish you the best of luck.”

Following the Co-Salutatorian addresses, Valedictorian Cierra Espinoza took the stage and thanked everyone who had been instrumental in helping the Class of 2021 to reach this milestone.

“Life is hard,” the Valedictorian said, “and it only gets harder from here. If the Lord is your priority and you lean on his understanding and not your own, you will get through it. My challenge to you is to look at each day and find new ways to trust in the Lord – to better serve him and one another. I am so grateful for the time we have spent together – the memories we made and the friends I have gained from this class. And as Reese Witherspoon said in ‘Legally Blonde,’ ‘Congratulations Class of 2021! We did it!’”

With the ceremony nearing the moment the 41 seniors had long awaited, High School Principal Katie Doughty took the stage to pay tribute to the Class of 2021.

Lila Munoz followed the principal and paid homage to the faculty and staff of GHS. She thanked them for their patience, kindness, knowledge, determination and for pushing them to reach the first of many goals.

Gracie Conner was up next and she presented the district with a fountain from the Class of 2021.

Board of Trustees President James Martin followed after the gift presentation recognition and was joined on stage by Doughty as the two began to confer the Class of 2021 with their diplomas. As the seniors walked across the stage, parents, relatives and friends showered the graduates with applause and shouts of joy and pride.

In the wake of the diploma presentation, the 2017 GHS class officers led the audience in the school song while longtime educator Arthur Betz brought the ceremony to an end as he provided the benediction for the newly graduated GHS Class of 2021.