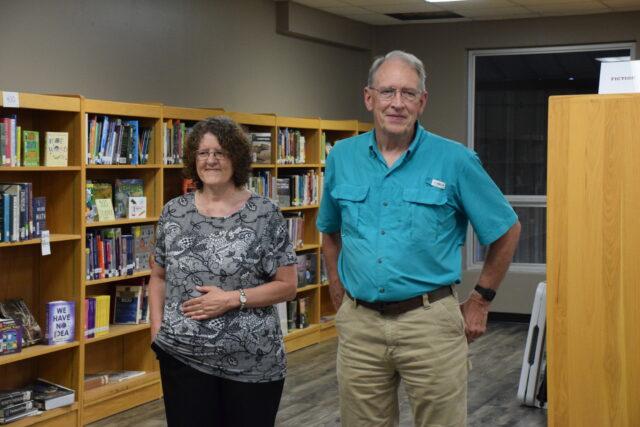 Students Recognized by Board

GRAPELAND – Saying goodbye is never easy, especially when the people you are saying goodbye to have influenced and impacted generations of students. Such was the case on Monday evening when the Grapeland ISD Board of Trustees bid adieu to a pair of long-term educators in the district.

During the regularly scheduled meeting of the GISD Board, High School Principal Katie Doughty announced Science Teacher Karen Cole, along with History/Government/Economics Teacher Arthur Betz would be retiring at the end of the 2020-2021 school year.

“We have two retirees here today. I would like to consider them as legends here at Grapeland High School – Mr. Betz and Mrs. Cole. When I think of these two, the word that comes to mind is truly solid. They are reliable and have great relationships with the kids,” the principal said.

After the introductions, a video was shown of several of their colleagues expressing appreciation and congratulations to Mrs. Cole and Mr. Betz on their upcoming retirements.

Superintendent Don Jackson added, “While there will be someone else in your rooms next year, we can never replace you. Thank you so much.”

There will be a retirement reception for the two longtime educators on Sunday, May 22 beginning at 3 pm in the Grapeland High School Commons Area. The reception is open to the community, as well as to former students, who wish to extend congratulations on the retirements.

Prior to the goodbyes, Doughty announced the Class of 2021 Valedictorian is Cierra Espinoza while adding there would be Co-Salutatorians – Stacy Perez and Mary Jane Watson.

“We actually have two Salutatorians,” she said. “I calculated again and again and they are tied to the fifth decimal place. I figured what a better way to honor both of them.”

She added, “I also want to congratulate these three because they have been a part of our pilot program for dual credit over the past two years. These two (Stacy and Mary Jane) were also on the President’s List and Dean’s List for this past semester. They are basically full-time college students while still attending Grapeland High.”

Several groups of students were also recognized by the trustees for their accomplishments during the Spring Semester.

Once the recognitions concluded, the first order of business was to canvass the election but because there were no contested races in the May 1 election, a canvass was not necessary. As a result, Board Members Allen Cheatham, Josh Goolsby, Ryan Richie and Brad Spisak were sworn in for another term on the GISD Board of Trustees.

As the meeting continued, Superintendent Jackson provided his monthly report to the trustees.

“Things are going well at the schools. We are wrapping up. We had an end of year challenge for our kids on attendance, attitude and academics to get the most out of them as they finish the school year. We are giving them some reward trips in order to do that. I believe those are next week,” he said.

“It has been a very solid year,” he continued. “What we are focusing on now is space at the elementary school. We are looking at transfers very closely because we are growing. It is a good problem. We are getting students from area schools that are coming here and we going to have to make some decisions on: do we grow with our faculty to meet that demand or do we start saying no? We have already put in a $500 transfer fee, which I don’t think will stop anyone from coming. We are having a meeting this week to sit down and look at our transfers and see if they are performing like they should, because we may have to say no to some who are not. It’s a good problem.”