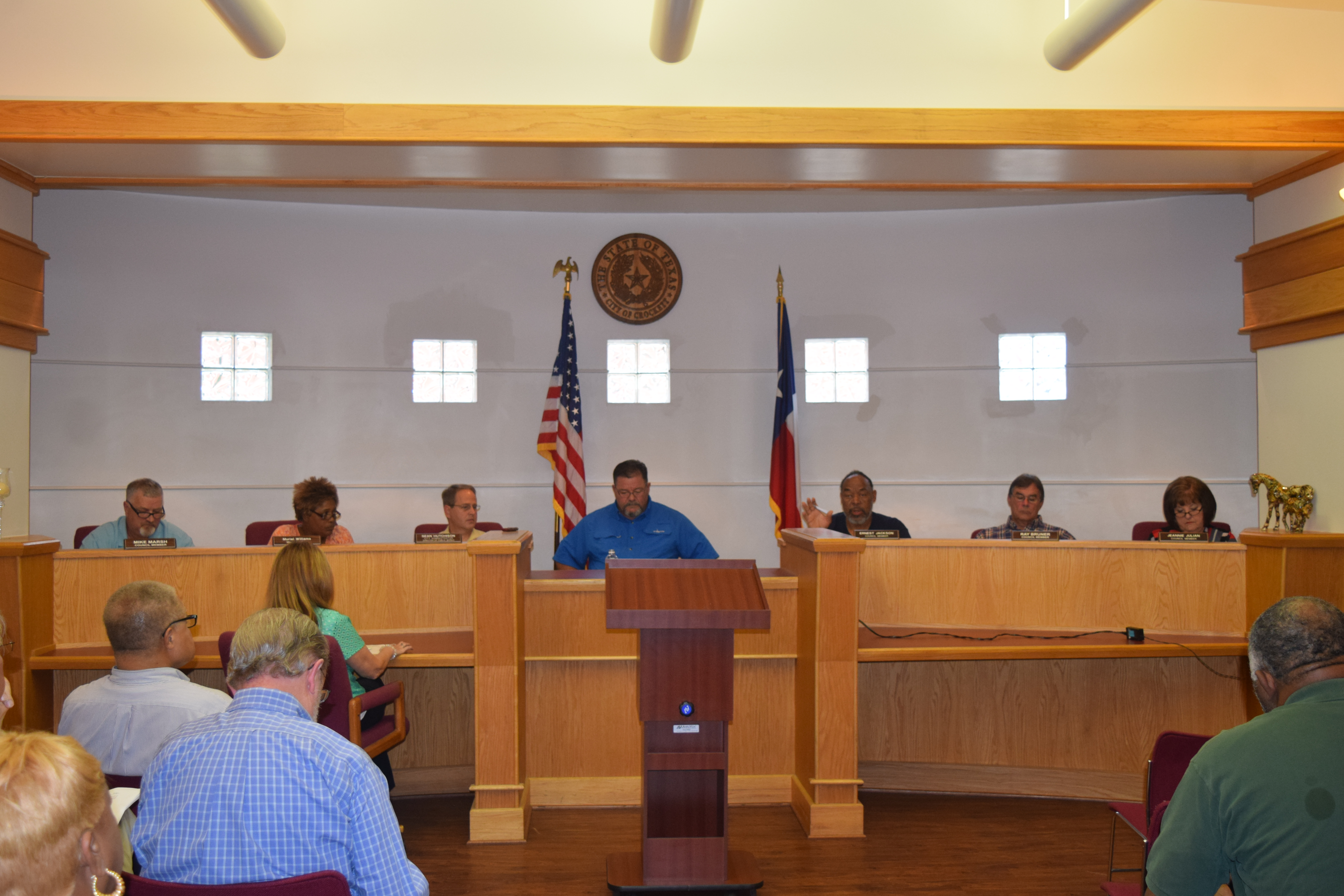 CROCKETT – The third time really was the charm for the Crockett Economic and Industrial Development Corporation (CEIDC) as the organization finally had its budget approved by the Crockett City Council. In two previous meetings, a motion to approve the CEIDC budget had died for lack of a second.

In a special meeting of the city council, held on Monday, Aug. 22, the consideration and possible approval of the CEIDC budget was the only actionable item listed on the council’s agenda. This time the measure passed by a margin of 4-1, Councilman Ray Bruner voting in opposition.

As the council session got underway, Crockett Mayor Robert Meadows welcomed those in attendance and informed those in the council chambers, the rules for speaking during the public forum portion of the meeting would be enforced (time limits, decorum, etc.). He explained the speaker would be given an initial warning and if the person addressing the council continued to use objectionable language or engage in personal attacks, the speaker would be removed from the meeting.

Following his cautionary words, the public comments began. The first speaker was Bill Brown, a teacher at CISD. He said, “A lot of the kids, because of the third or fourth generation of welfare, seem to have tunnel vision. They don’t quite understand there’s a whole big world out there. I think the CEIDC is proposing bringing in a new car dealership and I think that would help to start opening up the economy in Crockett. I know that a lot of kids don’t see anything outside of Crockett. If they something outside of Crockett and see Crockett trying to grow, maybe they will see other opportunities.”

The mayor added the council had recently approved the CEIDC to move forward with offering a tax abatement to a potential new car dealership.

Following Billy Groves who expressed his appreciation to the Crockett Police Department for participating in the recently held “Back to School Fun Day,” Crockett resident Dave Deming addressed the council and said he was “… speaking in favor of the new fiscal year CEIDC budget.”

He added he was originally from Crockett and remembered when he was a kid, the downtown area of Crockett would be bustling every Saturday morning. “I want to see a return to those days. I want more shops and restaurants and service businesses in downtown Crockett. To get there, we will need more businesses on the loop in order to attract customers from the surrounding areas. More jobs at new companies on the loop will mean more service businesses on the loop, but it will also mean more businesses will prosper and grow in town. As young people get jobs and decide to stay in Crockett, the business climate will continue to improve everywhere across the city. Will Crockett reach that point? Will Crockett begin to grow again and continue to grow? In my opinion, attracting new businesses and new jobs to town is the only way to achieve that kind of growth.”

As he continued, Deming said Crockett could either foster a climate of growth or stay the same because of fear of change. He added because things never stay the same, if Crockett didn’t attempt to grow it would continue its decline “… and never be able to undertake the infrastructure improvements and maintenance that are needed. As I see it, the choice is either growth or decay. I urge you to support the budget for the CEIDC.”

The final person to speak in the public forum was Joby Hardwick who said he ran “… number of businesses in Crockett and had over time invested millions (of dollars) in improvements to these businesses in our community. My businesses employ over 100 local residents and my businesses have never received a dollar in assistance from the CEIDC in the many years I and my family have resided here.”

“I am saddened to report,” he added, “My hotels have been under attack by the Houston County Appraisal District. For example, one of my properties has seen its taxable value triple and another almost double.”

Hardwick added, “I feel I have invested more than any local individual and personally and financially witnessed this financial discrimination. Is this the game, enticing investors into our city and then sticking it to them over time with increased property taxes? Unlike P-Chem and Zylkha Biomass, I actually live here and have a young family to raise. I do not have the luxury to pack up and bail. Then I read the CEIDC is soliciting other hotels, despite my hotels operating at trailing 12 month occupancy of combined occupancy of less than 50 percent. May I make a suggestion? That is that our economic board get more acquainted with current local business owners and ask what they may do to assist in their growth? And, to employ more of our citizens before soliciting outside proprietors? I pray that for all involved, the economic advisory board and city council, will educate themselves more thoroughly prior to commenting or voting on these related matters.”

Once the public forum concluded, the mayor commented on the performance of CEIDC Executive Director Flint Brent and said, “It is my hope that we do Mr. Brent the opportunity going forward. He is filling the pipeline and I trust that some of these things (potential businesses) will come to fruition. I trust that they will. All I’m saying is this – some issues have been brought to light concerning the CEIDC. We need to address those. I believe we have a lot going for us.”

Councilman Ernest Jackson said he believed the council’s oversight of the CEIDC had failed in years past and the relationship that should have developed was non-existent. The councilman went to say he felt with better oversight and a new director at the CEIDC, the organization would be a useful tool in growing the city.

“What do we do council?” Mayor Pro Tem Muriel Williams asked. “I think in good wisdom, we forget those things that are behind us and press forward. We cannot undo things done in the past. All we can do is press forward. With all due respect, I think we would do a great injustice to Flint by not passing this budget. He has to have this budget to show what he can do. He can’t undo what has happened in the past, but he has now to go forward.”

Council member Jeannie Julian followed the mayor pro tem and said, “I think everyone here has expressed they are for economic development. It brings jobs and life. I want all of that just like everyone else, but I am totally against waste. I feel like there needs to be some changes in the way things are run. I have a few questions, I really haven’t been able to get answers to.”

Julian asked how much debt did the CEIDC have, what projects were responsible for that debt, how many jobs did those projects create and why was this constantly being blamed on the former CEIIDC director.

“I want more transparency and more accountability as we go into this process. I want an opportunity to look at those things and make those changes,” she said.

After the council comments, a public hearing was held on the proposed FY 2017 tax rate. No one spoke for or against the matter, so the hearing was closed.

After a lengthy discussion, a motion was made by Mayor Pro Tem Williams to approve the FY 2017 budget for the CEIDC and the motion was seconded by Councilman Jackson. When the matter was put to a vote, the result showed the measure passed by a 4-1 margin. Councilman Ray Bruner voted against the matter.

With no further business, the meeting was adjourned.