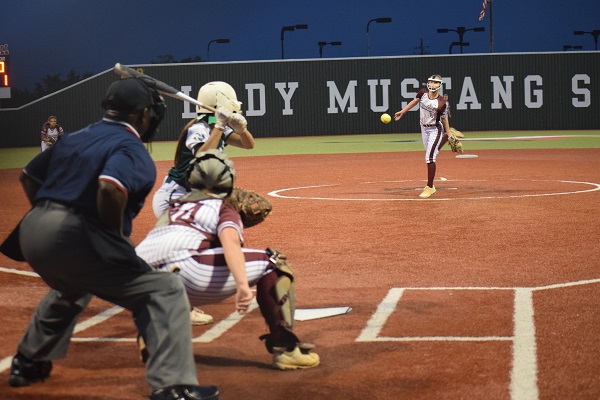 MADISONVILLE – It took a while on Thursday night, but the Grapeland Sandiettes are Bi-District Champions after outlasting several weather delays and surviving a six-run fifth inning from the Normangee Lady Panthers.

The game was scheduled to start at 7:30 pm, but lightning strikes in the area forced the teams to clear the field. When play resumed, the Sandiettes plated two runs in the bottom of the first. Another weather delay caused a 30-minute wait between the first and second innings.

Following a scoreless second inning, the thunder rolled and lightning could be seen in the distance forcing yet another delay in the action.

Once play resumed, the Sandiettes exploded for five runs in the bottom of the third to take a commanding 7-0 lead. They would need every one of those runs as the Lady Panthers came roaring back in the top of the fourth with six runs to cut Grapeland’s margin to 7-6.

The Sandiettes responded in their half of the fourth with another five-run inning while the pitching and defense of Grapeland shut down the Normangee offense. The Sandiettes plated another three runs in the fifth and one more in the sixth as they pulled away from the Lady Panthers to win the Bi-District Championship,16-6.

Jaycee Graham was in the circle to start the game for the Sandiettes and worked a fairly easy, first inning. Dusti Harris led off for Normangee and fanned on a 3-2 pitch. Jordan Noack was up next and reached on a single to left.

Noack stole second and third but, Reagan Corgey who was in the batters’ box for the Lady Panthers struck out, holding Noack at third. The next batter was Kourtney Wright who grounded into a 6-3 force at first to end the Normangee threat.

Corgey got the start for the Lady Panthers and she looked a little shaky. After getting lead-off batter Kierra DeCluette to line out to short, Corgey also forced MaKayla McCombs to ground to short. The throw to first, however, was high and McCombs was ruled safe.

Kayleigh Lively followed with a hard-hit ball to left which moved McCombs to third. Graham followed in the order and lined a pitch into center field. The ball was tailing towards left and despite her best efforts, centerfielder Addison Hill couldn’t catch up to the ball as it glanced off the tip of her glove.

McCombs scored on the play and when Lively slid across the plate, Grapeland had a 2-0 lead. Graham took third on the throw but was stranded there after Jessi Cunningham fouled out and Haley Boehm lined to short for out number three.

Following a weather delay and an uneventful second inning, the girls resumed play in the top of the third inning.

Jordan Embry reached on an error to lead off for the Lady Panthers. A passed ball moved her to second but Graham came back to strike out Hill. Harris was called out for interference while Noack lined out to end the Normangee part of the third.

When the Sandiettes came into bat, the fans heard a thunderclap – not from the weather – but from the bat of DeCluette as she blasted a 3-1 pitch over the wall in straight away center field to make the score 3-0.

After the homer, Corgey seemed to clam down as she got McCombs to pop up in the infield and followed up with a K of Lively.

A two-out single put Graham on first and she advanced to second on a wild pitch. With Cunningham at the plate, an infield error allowed Graham to score and Cunningham to reach second.

A wild pitch moved her to third while Boehm drew a walk. Cheyenne Lomax was hit by a pitch to load the bases while a wild pitch allowed Cunningham to sprint home and make the score 5-0.

Boehm and Lomax moved up a base on the play and when Kalani Barnett laced a single to left, the two baserunners crossed the plate to make the score 7-0.

After Corgey retired Anna Cutshaw on an inning-ending liner to second, the Lady Panthers came roaring back. Normangee scored six runs in the top of the fourth to slow the Grapeland momentum and trim the lead to 7-6.

With the momentum on the Lady Panthers side of the field, it appeared as if the Sandiettes might be in trouble. DeCluette, however, stepped up her game once more as she led off the bottom of the fourth with a triple into right field.

DeCluette scored on an infield single from McCombs. A walk to Lively moved McCombs to second and brought Graham to the plate. The Grapeland pitcher grounded into a fielder’s choice at second while McCombs eased over to third.

Cunningham was up next and roped a double into the center field gap. The two-base knock drove in McCombs from third and allowed Graham to motor around the base paths and cross the plate to make the score 10-6.

As the inning continued, Boehm singled to left to drive in Cunningham while she took second on the throw.

An error allowed Lomax to reach and moved Boehm to third. Barnett followed with a ground ball up the middle to plate Boehm and make the score 12-6.

When Normangee finally managed to retire Grapeland in the bottom of the fourth, they seemed somewhat deflated when they came up to bat. Graham took full advantage of this as she mowed down the Lady Panthers in order on nine pitches.

Grapeland added three more runs to their total in the bottom of the fifth and another in the sixth to make the score 16-6 as the game was called by the 10-run rule.

Graham picked up the win as she went six innings. She gave up six runs on three hits, struck out four and didn’t walk anyone.

Corgey took the loss as she pitched 5.2 innings. She gave up 16 runs on 14 hits, struck out one, walked four and allowed one HR.

The win moves the Sandiettes into the Area Round where they will face the winner of the Thorndale vs. Harper matchup. The date, time and location had not yet been determined as of press time.