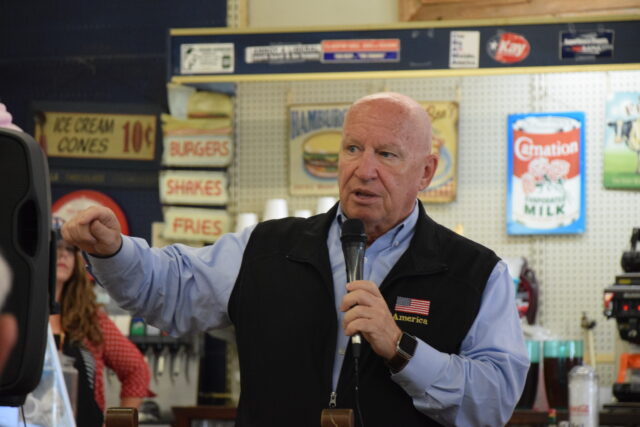 THE WOODLANDS – On Wednesday of this past week, Congressman Kevin Brady (R – TX 8) announced his intent to retire from Congress at the end of his current term in office.

During remarks delivered to the Woodlands Economic Outlook Conference on April 14, Brady stated, “I am retiring as your Congressman. This term, my 13th, will be the last. I set out to give my constituents the representation you deserve, the eﬀectiveness you want and the economic freedom you need. I hope I delivered. It’s a remarkable privilege to work for you in the U.S. House of Representatives.”

The congressman thanked all of his constituents for the trust they placed in his leadership during his tenure the US House of Representatives and said he was extremely proud to have served as only the third Texan in history to chair the House Ways and Means Committee. He also thanked his wife Cathy, saying she was “… a true angel, who made all this possible and is the best thing in my life. Ever.”

“I love this job,” he continued. “And thanks to incredible lawmakers I’ve worked with in Congress and the White House, I’ve been fortunate to do big things for our country. Bigger than a small-town boy from Rapid City, South Dakota whose father died when young, with all ﬁve of us children raised by a remarkable single mom, could ever dream of.”

Brady stressed there was no singular reason for him to depart the Nation’s Capital saying it wasn’t because he had lost faith in a partisan Congress or because of former President Donald Trump.

“In the end, I’ll leave Congress the way I entered it, with the absolute belief that we are a remarkable nation – the greatest in history,” he said.

“Are we a work in progress?” Brady questioned. “Absolutely, and there’s plenty of work yet to be done. But that’s what makes America so special. Every parent, every generation, is determined to leave a nation for our children – and others – better than the one we inherited. We devote much of our adult lives to this. As a result, the American Dream is still alive and well for anyone willing to work for it until it’s theirs. That is why I remain optimistic about our country, because I have faith in our people. I’ve seen up close how remarkable you are, and while I am leaving Congress, I am excited about our future.”