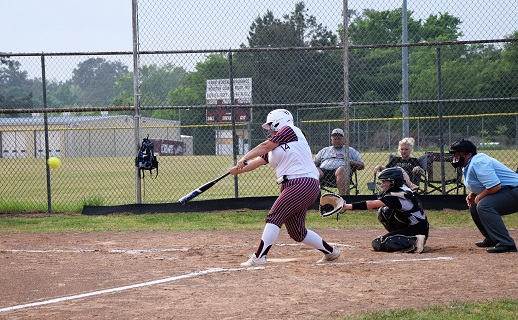 LOVELADY – The Lovelady Lady Lions put their #2 Class 2A state ranking on the line last Tuesday as they welcomed the Douglass Lady Indians to town for a District 21-2A matchup.

So far this season, the Lady Lions are 24-1-1, with their lone loss coming at the hands of Willis by a final score of 7-2. Two days later, Lovelady avenged their loss with a 3-0 win over Willis. Since then, the Lady Lions have scored in double digits in 12 straight games.

Tuesday night’s affair was more of the same as Lovelady blasted Douglass by a final score of 10-1.

Surprisingly enough, the Lady Indians got on the board first when All-State pitcher Mimi Sandoval gave up a homerun in the early innings of the game. That was all she allowed, however, as she shook it off to throw seven innings of three-hit ball.

Offensively, Lovelady hit the ball well on the night but to their credit, Douglass made several nice plays in the field to keep the game from getting out of hand.

The Lady Lions finish the regular season on Tuesday of next week and will start to gear up for the playoffs which begin on April 29.