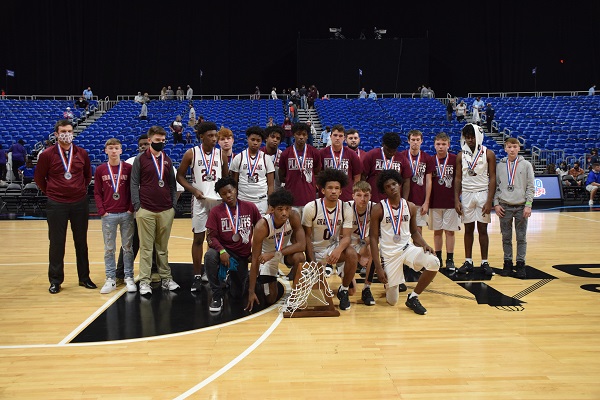 Grapeland Falls to Clarendon in Finals, 64-60

SAN ANTONIO – Sometimes things are just not meant to be. Knowing this, however, doesn’t make it hurt any less and to come as close as the Grapeland Sandies came to winning the 2020-2021 UIL Class 2A Boys’ Basketball State Championship, sometimes makes it hurt even more.

The Sandies traveled to San Antonio last week to take on the Clarendon Broncos in the State Championship Game and with less 30 seconds left to play, it appeared as if Grapeland was going to bring home the gold.

The lead was 60-59 in favor of Grapeland and the Sandies had the ball. Unfortunately, missed free throws, turnovers and a questionable pair of charging calls all came together in the waning seconds to snatch the championship from the hands of the Grapeland squad as they fell by a final score of 64-60.

As the game got underway, it appeared as if the tempo suited the Sandies style of play. Keizion Ashford blocked a shot on the offensive end of the court, ran the ball down and took it the length of the court to score the game’s first points.

Ashford was on fire during the first eight minutes of play as he scored the Sandies first eight points of the game. Grapeland, however, committed several uncharacteristic turnovers which allowed the Broncos to take control in the early going and finish out the first quarter with an 18-12 lead.

Clarendon’s first period points came from Donovan Thompson with six while both Sylvester Ballard and Jordan Herndon had four apiece. Jmaury Davis and LaMarcus Penigar split the other four Bronco points in the quarter.

Aside from Ashford, BJ Lamb dropped in a two, while both Cadarian and Omarian Wiley made one-of-two from the free throw line to round out the Grapeland first quarter scoring.

The second quarter saw the Sandies struggle from the field and fall behind by eight. A late surge, however, kept Grapeland in the game as they only trailed by four at the break.

Lamb came alive in the second with five points while C. Wiley began to assert his dominance in the paint with five of his own. Ashford and O. Wiley added two apiece to help slice the Clarendon lead to 30-26 as the two teams retired to their respective locker rooms for halftime.

The Broncos’ offense, thanks to the Sandies’ D, began to sputter somewhat in the second period. Thompson continued to be a thorn in Grapeland’s side with six points while Davis dropped in four. In addition, Ballard closed out the Clarendon first half scoring with two.

With only two quarters of basketball remaining in the season, the Sandies began to whittle down the Broncos’ lead.

Lamb trimmed the lead to a single possession with a layup to start the second half. After Penigar converted one-of-two from the charity stripe for the Broncos, Grapeland brought the ball up court with a chance to tie or take the lead.

The lead didn’t last very long, however, as the Broncos ripped off six straight points to take a 37-32 lead at the 5:07 mark of the third.

Grapeland cut the Clarendon lead back to one with just under four minutes left in the quarter on a basket from Lamb following a blocked shot by Murchison.

After the two teams exchanged baskets, Lamb hit a jumper from the wing to put Grapeland back ahead. A layup from O. Wiley gave the Sandies a three-point lead with 36 seconds left in the quarter but a three-point play from Ballard on the ensuing possession tied the game at 44.

With 26 seconds left in the third, Grapeland decided to play for the last shot of the period. The Sandies put the ball in Lamb’s hands and the senior managed to draw a foul which sent him to the line. Lamb calmly drilled both free throws to give Grapeland a 46-44 lead with under 10 seconds.

It looked like the Sandies would take the lead into the fourth quarter but a three from the Broncos’ Thompson as time expired flipped the lead and allowed Clarendon to take a 47-46 lead into the final period of play.

The last second shot seemed to temporarily demoralize the Sandies as the Broncos went on a 7-0 run to start the fourth quarter.

After a timeout, however, Grapeland started to creep back into the game. A free throw from Ashford trimmed the lead to seven while a layup from Michael Dancer cut it to five. Back-to-back baskets from Lamb and Ashford had the Sandies back in business as the scoreboard now read 56-55 with 3:24 left to play.

A pair of free throws from Penigar pushed the lead back to three but Lamb responded with a pair of his own to slice the lead down to a single point, once again.

A turnover by Clarendon gave the ball right back to the Sandies. A missed layup was rebounded by Wiley who fed the ball to Lamb. As Lamb attempted to put up a shot, he was called for a charge giving the ball back to the Broncos.

It was Lamb’s fifth foul and came with the Sandies down by two with 55 seconds left in the game. Ashford had fouled out 20 seconds earlier, leaving Grapeland’s two All-State players on the bench for the stretch run.

Fortunately, the Sandies still had C. Wiley on the floor and the junior – who should make the All-State team this year – responded. Wiley worked his way inside for two to tie the game at 59 with 44 seconds left to play.

A steal by C. Wiley and a foul on the Broncos’ Thompson put C. Wiley on the line where he made one of two to give the Sandies a 60-59 lead with 35 seconds left in the season. The second free throw attempt was snagged by the Sandies and a timeout was called.

After the inbounds pass, a turnover at the 24 second mark gave the ball back to Clarendon and a foul sent Penigar to the line where he tied the game at 60.

The basketball Gods were not on the Sandies’ side, unfortunately. A steal by the Broncos led to a layup from Penigar to put Clarendon up by two with under 10 seconds left in the State Championship.

With one last chance, Grapeland’s Lekerian Smith brought the ball up court and saw a crease in the Broncos’ D. Smith drove through the lane and put up a shot at the four-second mark. The ball kissed off the glass and dropped through the net. On the play, a whistle was heard. It seemed like Smith might get a chance to go to the line and win the game for the Sandies.

The officiating crew, however, called a charge on Smith, negating the basket and giving the ball back to Clarendon. Thompson was then able to ice the game with a layup as the Sandies fell to the Broncos by a final score of 64-60.

On the game, Clarendon was led by Donovan Thompson with 21 points and five rebounds. Jmaury Davis knocked down 13 points and pulled down eight boards. Sylvester Ballard scored 12 points and had eight rebounds, Lamarcus Penigar netted eight and dished out three assists while Jordan Herndon went for six and had five rounds. Closing out the Broncos scoring was Cayden D’Costa with four points, four rebounds and five assists.

Cadarian Wiley notched a double-double with 13 points and 14 rebounds. Wiley also had two assists and four steals. Omarian Wiley added five points to the Grapeland total and had five boards. Michael Dancer and Riley Murchison both had two points apiece to close out the Sandies’ point production.

After the game, Keizion Ashford and BJ Lamb were selected to the All-Tournament team. They were joined by Clarendon’s Sylvester Ballard, Jmaury Davis and Donovan Thompson.  Thompson was selected as the Championship Game MVP.

The Sandies finished their season with a record of 29-2 and while it didn’t end the way Grapeland fans had hoped, the Sandies had a spectacular season and should be applauded for the way they never gave up and fought until the bitter end.

From all of us at The Messenger, congratulations on making it to the Class 2A State Championship Finals and thank you for a very enjoyable basketball season!