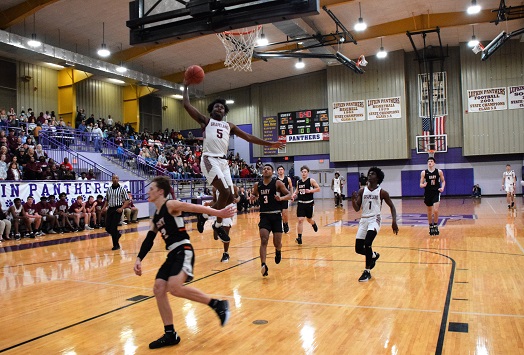 LUFKIN – The Grapeland Sandies took another step on the road to San Antonio during Tuesday night playoff action as they slipped into the Region III Finals following a heart-stopping 48-46 win over the Gary Bobcats.

The Region III Semifinal was the perfect trap game for Grapeland as the Sandies entered the contest having just knocked off the previously #1 ranked Martin’s Mill Mustangs on Saturday afternoon by a final score of 81-75.

The Sandies are a team that likes to play an up-tempo style of basketball and they couldn’t have found more of a polar opposite than the Gary Bobcats.

Gary plays a slow, methodical game. They execute the fundamentals well and are fairly comfortable with a game in the upper 40s and lower 50s. Grapeland, on the other hand, typically scores 45-50 points in a half.

It was a tale of two styles of play as the semifinal match-up got underway. Right off the bat, the Sandies defense made its presence known as they blocked three consecutive shot attempts from the Bobcats in the opening minutes.

Grapeland, however, also had trouble finding its rhythm on offense as the first point of the game came at 5:53 mark of the on a Riley Murchison free throw. The Sandies then reeled off five more points before Gary made a basket.

The Bobcats’ pace kept Grapeland from the accelerated tempo they prefer, but with time running down in the period, BJ Lamb knocked down a shot to give the Sandies a 12-6 lead after the first eight minutes of play.

Lamb led the scoring attack for Grapeland in the opening quarter with seven points. Keizion Ashford and Cadarian Wiley both had two while Murchison hit the previously mentioned free throw.

All six of the Gary points came from Ryan Ecker.

In a prelude of how the rest of the game would go, within the first minute of the second quarter, Gary whittled the Grapeland lead down to only two. Wiley, however, answered the challenge with a put back to keep the Sandies ahead. A three-pointer from the Bobcats’ Dakota Beckham cut the lead to one at the 5:42 mark.

Once again, Wiley responded as he worked inside for two. Gary would simply not fold as the Bobcats took their first lead of the game with one minute left in the half. A pair of free throws by Wiley regained the lead for Grapeland but Beckham’s second three-pointer of the period – with the clock racing toward zero – gave the Bobcats the halftime lead, 25-23.

C. Wiley scored eight of the 11 Grapeland points in the second while younger brother Omarian added two. In addition, Ashford converted one-of-two from the line to round out the first half scoring.

Beckham led the charge for Gary as he poured in eight second quarter points while Ecker dropped in another six. Landon Woodfin found the scoring column with three while Darin Livingston chipped in a basket to account for the Bobcats’ points in the quarter.

Following the break, the Sandies came out of the locker room with a renewed sense of urgency. Lamb tied the game at 25 with 7:14 left in the third and followed up with a slam that sent the Grapeland fans into a frenzy as the Sandies reclaimed the lead, 27-25.

The momentum of the game seemed to shift to the Grapeland side of the arena, but was quickly tempered when C. Wiley went down after he caught an elbow battling for a rebound in the paint. After receiving medical attention, Wiley was able to re-enter the game – and by the 3:37 mark of the third – the Sandies were up by six.

As the quarter continued, another cause for concern popped up as Lamb picked up his fourth personal foul with 1:08 remaining in the third. Still, the Sandies weathered the adversity of the period and when Ashford hit a lay-up at the buzzer, Grapeland managed to take a 35-31 lead after three were in the books.

With eight minutes remaining before moving on to the Regional Finals or ending the season, the two teams battled down to the wire.

Beckham hit a pair of free throws for Gary to cut the lead to a single possession, but C. Wiley responded with a two from down low.

The Sandies got a burst of momentum on the Bobcats’ next possession when Murchison had a huge block on an Ecker shot attempt. Shortly afterwards, Michael Dancer hit a floater from the lane to put Grapeland up by six with 4:30 left in the game.

After the two teams exchanged baskets, the Bobcats got a stop on the Sandies. On the ensuing possession, Woodfin drained a three to cut into the Grapeland lead. C. Wiley answered the challenge yet again and kept the Sandies up by two possessions.

The Bobcats were not finished, however. A three-pointer form Lane O’Neal trimmed the Grapeland lead down to three and when Ecker made one-of-two from the line, the Sandies lead was only two with 29 seconds left to play.

After a timeout was called, Grapeland Head Coach Blake Doughty drew up a plan to run a few ticks off the clock. The plan worked as the Sandies were able to run off 19 seconds before Lamb was fouled with 10.9 showing on the scoreboard.

Lamb made the front end of a one-and-one, but missed the back half. Gary snagged the rebound and called a TO with 7.9 seconds left.

Following the timeout, Gary inbounded the ball but was unable to get off a shot until only 1.8 ticks were left on the clock. The shot was no good, but on the play, Woodfin was fouled. He went to the line and made the first attempt. With less than two seconds to play, he purposely missed the second in hopes the Bobcats might get the rebound and hit a last-second shot to tie.

Things didn’t quite work out that way, however, as Lamb was able to snare the rebound and run out the clock, giving Grapeland the 48-46 win and sending them to the Regional Finals for the fifth year in a row.

The Sandies were led by Cadarian Wiley with a game-high 18 points. BJ Lamb had a double-double with 16 points and 10 rebounds. He also had four assists, four steals and one blocked shot.

On the game, the Bobcats were led in scoring by Ryan Ecker with 15 points. Landon Woodfin had 13 and Dakota Beckham netted 11. Darian Livingston had four and Lane O’Neal closed out the Gary scoring with three.

Keizion Ashford put in nine points to go along with two rebounds, two assists and a steal. Michael Dancer and Omarian Wiley both had two while Riley Murchison scored one.

After the game, Coach Doughty shared his thoughts on the contest.

When asked about the style of play Gary implements, he laughed and said, “They are good at it! They are really legit at that game. We played Mabank earlier in the year and they are very similar in the way they try to hold the ball for about two minutes on every possession. That really helped prepare us. I really am very thankful we played that Mabank game because it got us in the mindset to value every possession. You only get so many (possessions) when those guys are stalling the ball and holding it as long as they hold it. Every single possession becomes that much more important and that dynamic tonight really dictated the pace of play.”

“It was hard for us,” he continued. “We tried and we really tried hard to get them running, especially in the second half but they are so disciplined, they wouldn’t do it. I’m proud of my guys and the way they came back to finish the game, even though that wasn’t our style of play.”

Concerning the foul trouble BJ Lamb found himself in, Doughty said, “He is such an integral part of what we do offensively, but tonight we had a specific role for him defensively. Honestly, that role was an attempt to keep him out of foul trouble. He’s just so aggressive and so active. He is a senior and he’s a captain. He made the free throw to ice the game. I don’t think there is anyone else in the state, I would rather have than BJ Lamb, four fouls or not.”

The coach was also asked about how Cadarian Wiley seemed to respond every time Gary would draw close.

“He is a PTPer (prime time player), as Dick Vitale would say! He is a really, really good basketball player. He is an exceptional athlete and more importantly, he’s a great kid. And because he is such a great kid and his character is so high, big moments – they’re nothing for him. That’s impressive for me as a coach but more importantly that is impressive for me as a man, watching another young man come into his own. So yes, I am so very proud of him,” Doughty said, as he went to celebrate the victory with his team.

The Sandies will be back in action on Friday evening, March 5 as they travel to Fairfield to take on the LaPoynor Flyers in the Regional Finals. The winner of that game will advance to the State Semifinals. Tip-off for Friday night’s game is scheduled for 6 pm.

According to Grapeland ISD, tickets will be available “… to the public starting tomorrow (Thursday, March 4) morning at 7:15 am at the back door of the Administration Building. There will be a limit of two-per-person. You will take your purchase pass to the door on Friday and pay at the gate – $5 for adults and $3 for students.”