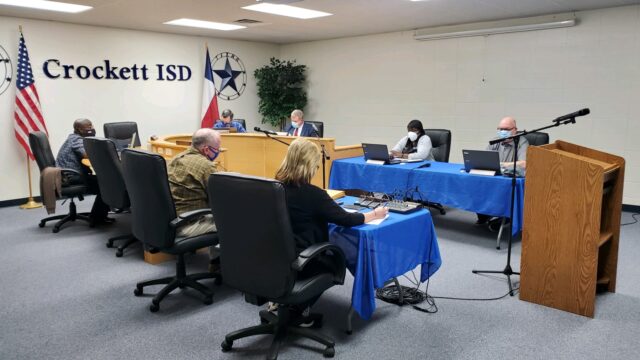 CROCKETT – While the snow and ice from last week’s winter storms has finally melted, the clean-up is just getting underway. Such is the case for the Crockett Independent School District Board of Trustees as they took measures to tidy up the mess caused by the winter storms during a regularly scheduled meeting held on Monday, Feb. 22.

CISD Superintendent John Emerich opened the discussion about the previous week’s weather and said, “As we know now, this wound up being a much larger snow event than they were expecting. It was much colder than expected and has been declared not only a state disaster but a federal disaster zone as well. The state has now allowed us to submit a waiver for the missed school days and not have to make those days up. So, I will ask for your approval to submit this waiver and I will use that for Tuesday, Wednesday, Thursday, Friday and today.”

Monday, Feb. 15 was a holiday. The waiver was unanimously approved.

The next item of business concerned pay for non-exempt employees who were unable to work because of last week’s deep freeze.

“This is a typical kind of thing when there is an event and the school gets shut down. We annualize people’s salaries so they can keep getting paid but technically those who are not exempt, there is a question about whether they should get paid. We are asking you to approve this resolution which allows us to pay those non-exempt folks.”

This resolution was also unanimously approved.

Prior to the snow and ice discussions, the superintendent emphasized the district would be open for school on Tuesday, Feb. 23 after being closed the previous week because of the wintry conditions in the area and because of water issues on Monday, Feb. 22.

“The city was able to restore water pressure to all of our buildings today, which is the reason we were not open today. We had to have sewage at least. We have some solutions for drinking water for the students and staff members but, we could not open the buildings without water. When we did get pressure back on, Mr. (Brian) Fiolek and his staff were working hard all day but we had some more (leaks) show up today. We got those repaired and I think we will be good to go tomorrow,” Emerich said.

The superintendent also expressed his appreciation to the city of Crockett for working day and night to restore water to the city and the district.

As the meeting continued, Emerich informed those in attendance the election for District Four would be cancelled because the only person to sign up for that particular place on the ballot was incumbent Karen Norman.