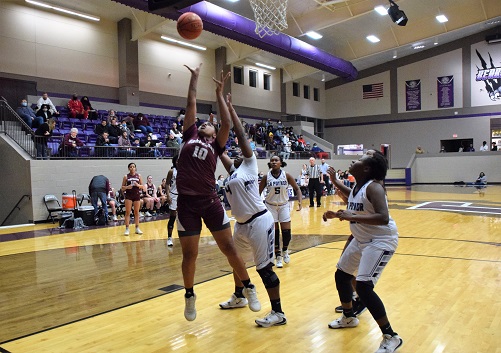 CUSHING – A long, trying season has come to an end for the Grapeland Sandiettes. It was certainly not the way they wanted it to end, but these young ladies have nothing to hang their heads about.

The Sandiettes lost four starters from last year’s State Semifinalist team. For the seniors on the squad, this was their third coach in four years. Injuries and illness plagued Grapeland throughout the year. COVID-19 shut down the program at least twice during the season and the list goes on and on.

Still, if you asked Coach Will Kollet, these were just excuses. Regardless of what was happening outside the baselines, he always had his girls ready to show up and play.

His team played hard throughout the season and took down a top 10 team in Centerville, while very nearly beating a very good Lovelady squad for second place in District 20-2A.

On Friday night, the Sandiettes traveled to Cushing to take on the #14 ranked LaPoynor Lady Flyers in the Bi-District round of the playoffs and for the better part of three quarters, it looked as if the girls from Grapeland just might pull off an upset.

Alas, it was not meant to be as the Lady Flyers pulled away in the late third and early fourth quarters to end the Sandiettes’ season with a 67-46 loss.

As the game got underway, Grapeland had a hard time finding the rim. The Sandiettes had good looks at the basket, but their shots simply wouldn’t go down. Still, they managed to hang tough and tied the score at six and then again at eight with 2:42 left in the first quarter.

A discrepancy in the number of fouls, however, allowed LaPoynor to take a 17-11 lead after the first eight minutes of play.

The Lady Flyers were led by Payton Maze and T’Mia Mitchell with four points apiece while four other LaPoynor players – Kitty Eldridge, Markayla Hurd, Laura McClelland and Staci Whitehead – all had two apiece. Laci Davis made one of two from the line to close out the Lady Flyers first quarter scoring.

The second quarter saw the Sandiettes cut the lead down to two when Jones made a put back at the five-minute mark. Back-to-back threes by the Lady Flyers, however, pushed the LaPoynor lead back to eight. A big three by Christi Shepherd with 1:45 left in the half, however, kept Grapeland within striking distance.

The two teams exchanged baskets as the quarter ticked away and by the end of the half, Grapeland only trailed by five, 31-26.

Shepherd led the way in the second quarter for the Sandiettes with seven points, while both Arthur and Jones dropped in four apiece.

Maze added another four to her total while both Davis and Hurd connected from behind the arc. Eldridge and Whitehead chipped in two apiece to bring LaPoynor’s first half scoring to a close.

Following the break, the shooting woes experienced by the Sandiettes in the early going returned. Jones notched another six while Arthur and Shepherd dropped in two apiece. Unfortunately, that was all the scoring Grapeland could muster in the third period.

Meanwhile, the Lady Flyers began to pull away after halftime. Whitehead netted six for LaPoynor while both Eldridge and Maze had four. Hurd added three to her total and Mitchell chipped in two as the Lady Flyers opened up a 50-36 lead after three quarters of play.

Try as they might, in the final period, the Sandiettes could not make a dent in LaPoynor’s lead as they fell by a final score of 67-46. Jones dropped in six more while Shepherd and Kyelan Beazley split the other four points equally to close out the quarter.

On the game, Staci Whitehead led the Lady Flyers with 15 points. Payton Maze had 12 while Kitty Eldridge and Markayla Hurd were both in double figures with 11 and 10, respectively. Laura McClelland added eight, T’Mia Mitchell had six, Laci Davis went for four and Marissa Hurd chipped in one.

Teira Jones led the Sandiettes with a game-high 21 points. Christi Shepherd had 11 and Te’Lia Arthur was also in double-figures with 10. Kyelan Beazley and Lila Munoz had two apiece to round out the Grapeland scoring.