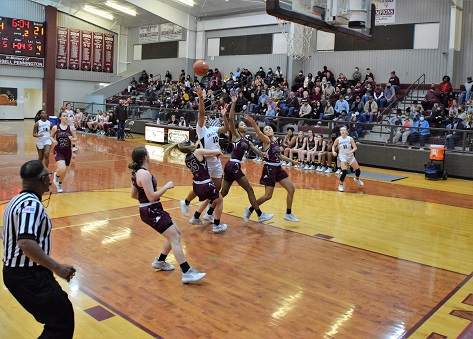 GRAPELAND – For the last several years, the Grapeland Sandiettes and Lovelady Lady Lions have dominated the district. This year, however, Centerville laid claim to the District 20-2A Championship leaving the Sandiettes and Lady Lions to battle it out for second.

Lovelady had beaten Grapeland in the first meeting between the two teams by a lopsided score of 86-31. Since then, however, the Sandiettes have improved tremendously and handed the Lady Tigers from Centerville their only loss in district play.

Friday night’s game between the two cross-county rivals had huge playoff implications. The winner would enter the postseason as the number two seed and would play the third seed from District 19-2A (the Frankston Maidens) in the Bi-District round. The loser, however, would have to face the runner-up from District 19-2A – the #14 ranked LaPoynor Lady Flyers.

As the game got underway, Lovelady seized the early lead and forced Grapeland to call a timeout with 4:12 left in the first quarter. The TO allowed the Sandiettes to refocus and stay within shouting distance of the Lady Lions as the period came to a close with Lovelady leading 17-12.

Kortney Bynum led the way for the Lady Lions in the first eight minutes of the game with six points. Shyanne Pipkin drained a three-pointer while four other Lovelady players – Macie LaRue, Rajanae Polhamus, Shelby Pugh and Morgan Womack – all had two apiece.

Mary Jane Watson paced the Sandiettes with five points in the opening period, while Teira Jones dropped in four. Christi Shepherd also added three for Grapeland in the first.

In the second quarter, Lovelady began to pull away from Grapeland. A big three by Shepherd at the three-minute mark cut the lead back to five and a three-point play from Jones whittled the margin down to four with just over two minutes left in the half.

With a 12-point lead sliced to four, it was the Lady Lions who called a TO this time. Whatever was said during the timeout apparently worked as Lovelady pushed their lead back to 10 by the end of the quarter and took a 33-23 lead into the locker room at halftime.

LaRue dropped in six points in the second quarter to lead the Lady Lions while Bynum, Polhamus, Pugh Womack and Haley Davidson all had two apiece to close out the first half scoring.

Jones added four to her total while Shepherd hit the three mentioned above. Te’Lia Arthur and Cyshia Black rounded out the Sandiettes’ second quarter scoring with two each.

Following the break, the Lady Lions pushed their lead out to 12 but a three-point play from Jones and a two from Lila Munoz cut the margin down to seven with 4:01 left in the third. Back-to-back baskets from Jones trimmed the lead to three with one minute left in the quarter before Lovelady closed out the third with a 43-38 lead.

Jones led the comeback with nine points in the third while Arthur, Munoz and Shepherd all had two apiece for the Sandiettes.

Aaliyah Jones came off the bench for the Lady Lions to score five points in the third while Bynum and Pipkin chipped in two each.

Once the fourth quarter began, the Sandiettes managed to cut the lead down to one at 45-44 and had a chance to take the lead with six minutes remaining in the game. Although they couldn’t get over the hump at that time, Grapeland trimmed the lead back to one with 4:30 left to play.

Unfortunately for the Sandiettes, that was as close as they would come as the Lady Lions pulled away late to win the contest by a final score of 64-56.

On the game, Lovelady was led by Macie LaRue with 15 points and Kortney Bynum with 14. Morgan Womack netted nine and Aaliyah Jones dropped in seven. Both Haley Davidson and Rajanae Polhamus had six apiece while Shyanne Pipkin had five and Shelby Pugh added four to round out the Lady Lions’ point production.

Teira Jones who was honored prior to the game for scoring over 2,000 points in her Sandiette career on the basketball court, led all scorers with a game-high 26 points. Christy Shepherd was also in double-figures with 10. Mary Jane Watson went for seven, Te’Lia Arthur had six, Cyshia Black added five and Lila Munoz closed out the Grapeland scoring with two.

Both teams are back in action on Friday, Feb. 12 as they play in the Bi-District Round of the 2021 UIL Girls Basketball Tournament.

Tickets may be purchased at the gate for Friday’s playoff games. The ticket prices are $5 for adults and $3 for students.