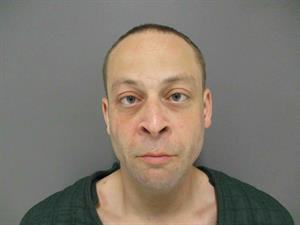 GRAPELAND – On Friday afternoon, Feb. 5 it was reported a Grapeland police car had been stolen from in front of Prosperity Bank while the GPD officer was inside of the financial institution.

The suspect, whose identity was unknown at the time, has now been identified as Stephen Eric Delance, 35, from Grapeland.

According to a press release from the Grapeland Police Department, a GPD officer parked his patrol unit in the parking lot of Prosperity Bank and went inside to conduct business. The patrol unit was running, but locked with the key in the ignition.

Delance was inside the bank at the time of officer’s arrival and was wearing a brown hoodie style jacket, blue jeans and black shoes.

The press release stated, “Delance exited the bank and entered his vehicle, a white Ford, which was parked next to the patrol unit. Delance backed up as if he were going to leave the property but instead, pulled back into his original parking spot.”

“At this time,” the media statement continued, “Delance exited his vehicle, walked over to the driver side door of the patrol unit, and looked inside. Delance then walked back to his vehicle and produced hedge shears from the bed of the truck. Delance proceeded to put the shears over his head and hit the patrol car with a great deal of force, shattering the glass of the driver’s side window. Delance stuck his arm through the window, unlocked the door and entered the patrol unit.”

With the patrol vehicle still running, Delance climbed into the driver’s seat of the vehicle and “… left the property in the fully marked patrol unit without the consent or knowledge of the City of Grapeland or the Grapeland Police Department. Grapeland Patrol Units are fully equipped with not only state computers but department issued weapons.”

The stolen patrol unit was found abandoned shortly after at the Valero Hot Spot #2 in Latexo.

Delance was charged with unauthorized use of a motor vehicle as well as being a felon in possession of a firearm. The motor vehicle charge is a state jail felony while firearms charge is a third-degree felony.

A state jail felony is punishable by confinement in a state jail for any term of not more than two years or less than 180 days, as well as a fine of up to $10,000.

Delance is held in the Houston County Jail on bonds totaling $50,000.

“Patrol vehicles are often left running and LOCKED while the officer is out of the vehicle. This is not an uncommon practice and this is the reason why.

“All Grapeland Police Department patrol units have locators on their in-car computers. GPD officers can see where other GPD units are at all times while on duty. The locator, as well as the computer, requires power to operate. The officer powers up the computer at the start of their shift, the normal power up sequence begins, then the officer will login to all the programs with their specific user name and passwords. Once all the programs are up and running, they are visible to GPD officers and other resources.

“The in-car camera system must also be powered up and a login sequence completed. This is a separate computer system and stores video and audio during police contacts, pursuits and other emergency situations. With all the computer systems and radio equipment on board the patrol car, batteries are quickly drained if the car is turned off. The officer would also have to restart the computer systems all over and login. In an emergency there is no time to do this.

“The officer involved was following all Grapeland Police Department protocol during the time of the theft as well as afterwards. We are grateful for his quick response to this unfortunate situation.

“Also, we would like to thank all the agencies who assisted with the apprehension of Delance and the recovery of our unit.”