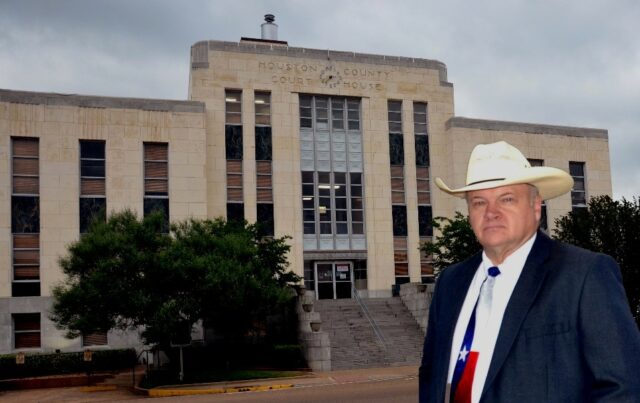 HOUSTON COUNTY – Houston County Sheriff Darrel Bobbitt has indicated he will not seek re-election after his current term expires. As a result, the county’s top cop position will be up for grabs when voters go to the polls in November of 2020.

In the world of politics, it’s never too early to get your name out there and on Wednesday of this past week, former Houston County Sheriff’s Office (HCSO) Deputy Randy Hargrove threw his hat into the political arena as he announced his candidacy for sheriff in the 2020 election.

“For the last 22 years I have served the citizens of Houston County as a Texas Peace Officer. Seventeen and one-half of those years were with the Sheriff’s Office and four and one-half years at my current position as a criminal investigator with the District Attorney’s Office. Today, I am announcing that I desire to continue my dedication and service to the citizens of my community by seeking the office of Houston County Sheriff in the upcoming 2020 election. Your support and vote are greatly appreciated,” Hargrove said in announcing his bid.

Asked why he decided to run for the sheriff’s position, Hargrove replied it had been on his mind for a number of years.

“It is almost like a calling a minister gets to a church. It’s just something I can’t get away from. It consumes my thoughts as far as this is where I’m supposed to be. Sheriff Bobbitt told me he wasn’t going to run and that’s what helped me make my final decision,” he explained.

Hargrove said he got into law enforcement in 1997, after he was injured in the field of construction.

“I wish I had been in law enforcement way before then. It gives you the ability to help folks that most people don’t have, unless you’re a peace officer. I truly do enjoy being able to help folks and intervene in any problems that arise and pretty much everything else that goes along with a peace officer’s job,” Hargrove said.

He left the HCSO in 2015 and went to work for DA Donna Kaspar as an investigator, where he has served ever since.

As the discussion continued, Hargrove was questioned about what he believed to be the biggest issue facing law enforcement in Houston County.

“Law enforcement-wise, it would be the battle against the drug culture. The thing about that is almost all the calls we got when I was at the sheriff’s office – whether it was family violence or a burglary or even a bank robbery – in some way it was somehow tied to the drug culture. The perpetrators seemed to be either users or sellers. Now, not everyone was involved with it, but a big majority was,” Hargrove said.

He added the drug issue was probably nationwide and said “… it was one of most pressing issues. I think it will be a battle that we always have to fight. Some of these guys are getting smarter and learning how to use technology. We have to prepare and train so we can keep the upper hand on them, especially with cell phones nowadays.”

On the other side of the coin, Hargrove said, was the matter of financial constraints. He said it was necessary to be able to pay deputies and jailers a livable wage because a lot of law enforcement personnel in Houston County moved to where they felt the pay was commensurate with the job.

“I think those two things go hand-in-hand. You try to do the best you can with what you have and then you try and do a little bit better. You need to learn how to better use the resources you have. At the end of the day, however, it goes back to the officers’ – regardless of the pay or what’s going on – dedication to their work,” he said.

Hargrove is a native of Houston County and was born in Crockett.

Meet the 2017-2018 Sandies and Sandiettes
TWC Announces Staggered Call Times
Life-Saving Skills: How to Make Your Own Emergency Medical Kit