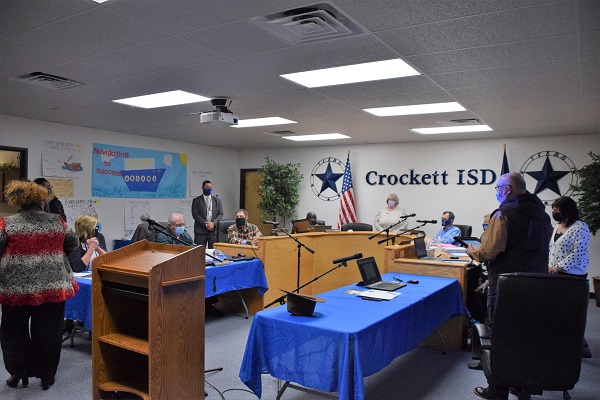 CROCKETT – The Crockett Independent School District Board of Trustees met in a regularly scheduled meeting on Tuesday, Jan. 19.

As the meeting got underway, the first item of business was the approval of consent agenda items. With no discussion the agenda item was approved.

The next item of business was Superintendent John Emerich’s monthly report to the CISD Board.

“This is the one time a year we formally recognize how much appreciation to the board members for the time they spend. Those of you in the public may not know, but these board members do not get paid a dime. This is often a thankless job and they spend a lot of hours and a lot of time helping to set the policies for this district,” Emerich said.

He continued, “Our theme this year is ‘Navigation to Success.’ We certainly appreciate your oversight and guidance for our district.”

Various gifts and tokens of appreciation were then presented to the board members from the different campuses and administration. A video produced by two of the CISD campuses was also shown to the trustees which expressed the thankfulness the district had for its board.

As the meeting continued, Emerich addressed the trustees and said, “As you are aware, we have three positions that are up for election in May. This is the standard procedure we have to go through for you guys to call for that election and start the process.”

The district will participate in a joint election with the city of Crockett. Early voting will be held at the Administrative Offices of CISD.