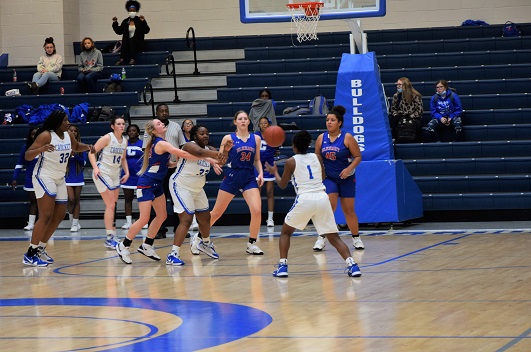 The Lady Elks, on the other hand, fell apart in the third quarter on the offensive end of the court as they only managed a single point. The fourth quarter, however, was a different story as Elkhart came roaring back to cut the Crockett lead down to one with under five seconds left in the contest.

A pair of missed free throws by Crockett gave the Lady Elks one last chance. A tough rebound on a second free throw miss was ripped down by the Lady Dogs and thrown back to the three-point line as time expired.

The game started out with Crockett opening up a seven point gap after the first eight minutes of play. The Lady Dogs saw Quenisha Henderson come out of the gates on fire as she poured in nine points in the period. Tocarra Johnson was nearly as hot as she put up seven of her own to give Crockett a 16-7 lead after one.

The Lady Elks were paced by Kassidy Thomas with four, first quarter points while Haleigh Chapin dropped in three and Brandi Cain had two.

The second quarter saw Crockett push their lead out to double digits as they went into the locker room at halftime up by a score of 33-20.

Henderson continued to bedevil the Lady Elks defense as she netted another seven in the second. Johnson and La’Kyreah Hamilton put in four while JaKenya Tryon chipped in a basket to close out the first half scoring.

Thomas continued to pester the Lady Dogs as she dropped in seven points in the quarter. Haley Stiff and Taylor Teems split the other four Elkhart points in the period.

When the two teams returned to the court after halftime, it appeared as if they left their offensive games hanging in a locker. Elkhart managed to score a single point on a free throw from Thomas.

The Lady Dogs didn’t fare much better as they only mustered seven points in the quarter. Henderson added four more to her total while Keaton Crabtree had two and Anaya Wooten converted one of two from the line to give Crockett a 40-21 lead after three were in the books.

While the Lady Dogs had trouble finding the basket in the third, things got worse in the final period of play as they only put up three points on a two from Johnson and a single free throw from Henderson.

Meanwhile, the Lady Elks found their offensive game in the final period of play and came within a few seconds of securing a comeback win for the ages. It was not meant to be, however, as the Lady Dogs held on for the 43-42 win.

Elkhart’s fourth quarter points came from Teems with seven and Thomas with six. Cain put in four while both Chapin and Jayda Clay chipped in two apiece.

On the game, the Lady Elks were led in scoring by Kassidy Thomas with 18 points and Taylor Teems with nine. Brandi Cain went for six, Haleigh Chapin netted five while both Jayda Clay and Haley Stiff chipped in two apiece to close out the Lady Elks’ point production.

Crockett was led by Quenisha Henderson with a game-high 21 points. Tocarra Johnson was also in double-figures with 13. La’Kyreah Hamilton put in four while both Keaton Crabtree and JaKenya Tryon had two each.  Anaya Wooten closed out the Crockett scoring with one.