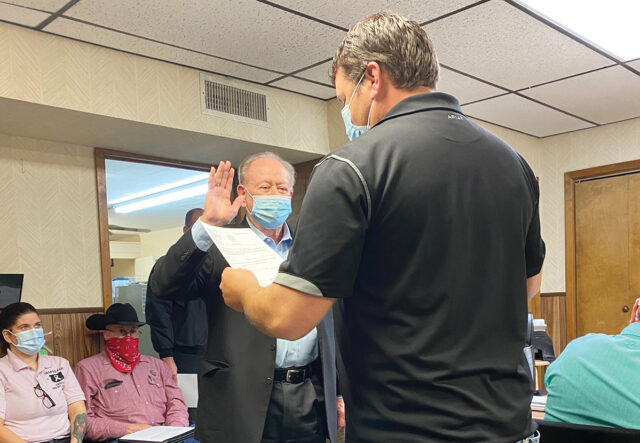 The meeting was called to order at 7 p.m. and moved quickly into the agenda with the minutes being read and a quick check on the need to add anything to the minutes.

The new mayor, Mitchell Woody did some “real time” triage of the order by which certain items on the agenda were moved so the meeting could be conducted more efficiently.

Each department reported on their status, revenue, expenses and important upcoming events.  Every department said they were doing well and exceeding revenue goals.

Public Works Director Kevin Watts informed the council of revenues generated by the waste water facility and how those figures (over $22,000 in this reporting period) were growing as the Darling Ingredients plant added more waste water to the steady stream of materials being processed.

Watts also brought forward an issue involving the removal of certain types of cloth rags, from the upstream portions of the plant, which were sticking in the screening process.  Parts have been ordered to help catch foreign objects before they get further into the plant.  Watts also reported there were “728 active water meters in the city.”

The Police Department, represented by Chief Kody Stephens had also seen a recent spike in revenue from speeding tickets and other traffic violations.  Chief Stephens’ team also noted a need to provide “gifts for 40 children in 19 households.”

Even the court, represented by Municipal Judge C. L. McGill, reported exceeding expectations with a rise in income. McGill stated, “Just shy of $4,000 was collected by the courts and $2,600 went the city.”

As the meeting continued, the council was asked to consider voting on the position for new Mayor Pro Tem. Velda Parker, who served in the last term as well, was elected.

Vulcraft, a division of Nucor, is ready to open their new expansion facility and it looks good for a jump in headcount to about 400 employees, according to Watts.  In addition, Vulcraft has given the city the materials to build a covered parking area for all of the city’s police vehicles.  A discussion of where to erect the covered spaces allowed all council members to discuss the exact parcel of land that needed to be used and it was determined the structure would be built at the north of city hall beside the current police department and municipal court building.

Also discussed was what to do with the vacant house located at 211 Sandy Lane, currently owned by the Rural Housing Development.  No final decision was made.

The highlight of the meeting was the swearing in of Judge C. L. McGill.  “C. L.” as he is known about town, was ready to move forward quickly on the obvious items needing his attention.

The meeting was then adjourned and a closed session meeting was held. According to the agenda, the following items were to be discussed;