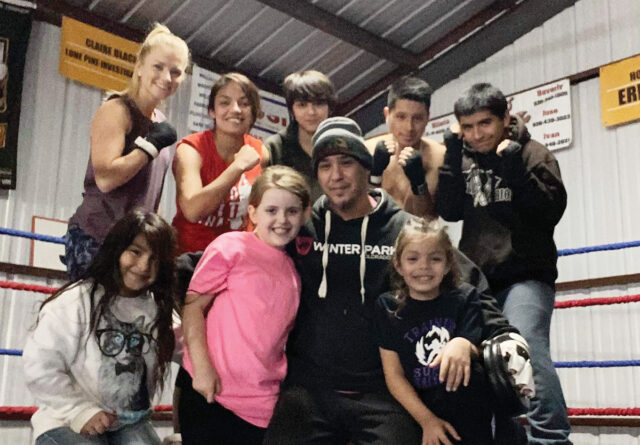 CROCKETT – About a year ago, God opened a door for professional boxer Victor Gonzalez when he got a call out of the blue about opening a boxing gym for youth and adults in Houston County. In fact, he was about to quit boxing altogether.

His life changed though when Houston County Justice of Peace Pct. 1 Clyde Black called. Years before as a young Houston police officer, Black got to see first hand the benefits a boxing club did for inner city kids. Over the years, the idea of opening the boxing gym locally percolated in his mind, especially as he saw issues with families and truancy as a Justice of Peace.

“I had the idea to give a little back to Crockett, add a place for people to get off the streets and have some entertainment and exercise they can afford,” Black said in a previous interview.

So, in early 2020, the Judge’s Chambers Boxing Gym opened on Alabama Street in Crockett – about the time that the first wave of COVID-19 closed local businesses, restaurants and gyms across the country.

Opening and closing the gym during the early part of COVID-19 gave Black and Gonzalez the time to focus on building a brand new facility for the gym, which officially opened on Nov. 16 at its new location at 905 S. 4th Street.

“It’s exciting and stressful. The judge has done a tremendous job of organizing all of this,” Gonzalez said on the opening day of the gym during an interview.

In fact, after seeing how successful Gonzalez was running the boxing gym for those first few months and how well he interacted with the youth and adults as he taught them boxing and life skills, Black gave Gonzalez the gym prior to the opening.

“It’s been a blessing. I am honored to take it. It’s taken a tremendous amount of support and contributions from the local community and a lot of work to get it open, but here we are,” Gonzalez said.

One of the main goals of the gym is to reach youth, targeting troubled teens, using boxing to redirect anger, frustration and anxiety while giving spiritual guidance.

“I let them know they are brave, they are strong. Boxing has so many benefits. It has helped me out a lot over the years. Discipline. Character. Determination. Self control,” Gonzalez said.

He compares boxing to real life.

“The whole time our kids are growing up, we are training them – jab, turn this way, turn that way and be safe. But when they are grown the bell rings and they have to do it on their own. We have to train them what to do. That’s what I love about boxing, it prepares them for life,” Gonzalez said. “If we don’t fight for our kids who will? If we don’t reach out and embrace our youth, the world will, the drug dealer down the street will.”

Gonzalez and Black both hope that people of all ages will utilize the gym to find a more positive and healthy path in life.

Gonzalez, who is from the Alice area, said the people of Crockett and Houston County have been amazing.

“I have received constant messages from people asking me when we would open back up. It’s been such a blessing to be in Crockett,” Gonzalez said. “I’ve never been in a town that has received me like this.”

The Judge’s Chambers Boxing Gym is an official affiliate of the USA Boxing organization, which sponsors the Golden Gloves competition.

“‘I’m really excited about Coach Vic getting the gym open. He is providing a great service to our community,” Black said.

Gonzalez, has boxed for almost 25 years – and became a pro boxer in 2019. He also is a certified corner manager and an amateur boxing coach.

“I love to work with youth. I try to build them up. I love to impact their lives and encourage them. It helps change their character. Their confidence grows as well as their strength and endurance,” Gonzalez said.

The gym is currently open from 5 to 8 p.m. Mondays through Thursdays. Gonzalez works with youth ages 6 and up specifically from 5:30 to 6:30 p.m. each day.

“This time we are more disciplined training wise. I want to get them ready to compete, if they have an interest in that. They can start competing at age 9,” Gonzalez said.

During the class, youth get an opportunity to circuit train at different stations and on the boxing bags as Gonzalez brings them into the boxing ring one on one to work with them on techniques during the class.

The gym also is open to adults. Membership for all ages is $35 a month. The gym also has a lot of new equipment for its members including weights, treadmills, an elliptical bike and a rowing machine, as well as several punching bags.

A local church donated pews for extra seating and a popcorn machine also was donated.

“We are going to have a concession stand and maybe in the future we will have a movie night,” Gonzalez said.

In his free time, Gonzales works as a custom finisher contractor and hopes to expand his business to the Crockett area. He has more than 25 years of experience and references.

For more information about the gym or membership, follow the Judge’s Chambers Boxing Gym on Facebook, stop by the gym during open hours, or call Gonzalez at 979-200-9672.