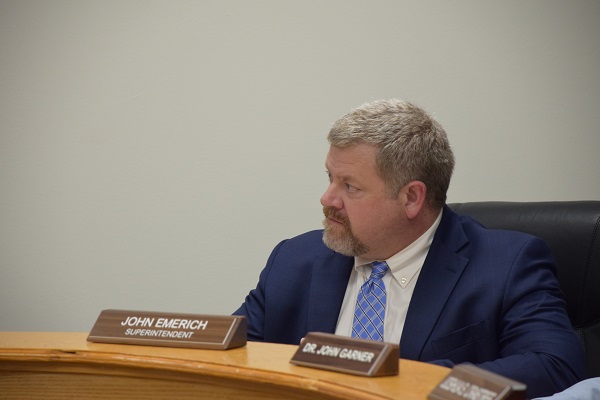 CROCKETT – The 2020-2021 school year, for those in East Texas, is starting out like no other year in education. Educators began with the knowledge they would be dealing with the COVID-19 pandemic but then a hurricane came along to add even a little more stress.

In Crockett, former Crockett ISD Superintendent Terry Myers announced his intention to retire in February and a new superintendent was hired in mid-March of this year. Because of the Coronavirus, however, it wasn’t until Aug. 20 that students were on campus with John Emerich serving as the district’s top educator.

Earlier this week, the new CISD superintendent took time to speak with The Messenger about the first few days of school.

“I think the first few days – considering everything that’s gone on – have went well. The teachers and students are trying to figure out the on-line learning, but that’s only taken a couple of days. Even in a regular school year, the first couple of days involve learning procedures and setting expectations. I am really proud of our staff. They are truly going above and beyond. All of this stuff has been dumped on the teachers and staff. They are having to do a lot more than normal to make things work. I want to recognize all the teachers and staff for what they are doing. All-in-all, I think it seems to be working out great. We are having more and more kids coming back to school. ” he said.

“I think we had some who were just a little hesitant,” he continued. “Once we were here for a couple of days, I think they figured out it wasn’t the doom-and-gloom that some thought. We had over 100 kids who had signed up for on-line learning come back just within the first five days of school.”

As far as implementing the COVID-19 protocols at Crockett ISD, Emerich said so far, everything has been fairly smooth.

“We haven’t had any problems with students wearing masks. Of course, the staff is wearing masks. I wondered how much of a problem that might be, but our kids have accepted it and I think they realize that it’s just a part of life now. It hasn’t been an issue. We’re doing deep cleanings of the buildings every night, so that has certainly helped. Unfortunately, just as some of the other schools in the county, we have had our first case of COVID-19 but we followed the protocols, called the Texas Department of Health and Human Services (TxDSHS) and figured out exactly what we had to do. We only had to send a few kids home, based on that one (now two) incident,” he said.

Concerning the threat of severe weather from Hurricane Laura last week, Emerich said it is always a difficult decision to cancel school but after Houston County Judge Jim Lovell issued a disaster declaration – along with the forecasts of torrential rain and tropical force winds – it was an easy decision to make.

“Of course,” he chuckled, “when I woke up Thursday morning (Aug. 27) and saw no wind along with sunny skies, I had a little twinge in my gut about what had I done. Had it hit here like it did in other areas not too far from here, we would have been glad we didn’t have kids out and about on the streets. All-in-all, for student safety, it was the right call.”

As a part of the decision to close school on Thursday and Friday, the Bulldogs’ football game against Corrigan-Camden was postponed until Saturday.

“We had a great game on Saturday night. The fans came in with their masks on and we didn’t seem to have any problems with that. The kids and the coaches all did a great job. I know when you’re winning big, it always helps with the attitude, but everyone behaved themselves. It was a great Friday, I mean Saturday night,” he said.

Emerich was also questioned about the ticket procedures for this Friday night’s game in Rusk against the Rusk Eagles.

Tickets for the game will go on sale at the Crockett ISD Administration Office Tuesday, Sept. 1 thru 12 pm on Friday, Sept. 4. Crockett ISD has been allotted 425 tickets. These tickets will be sold on a first come/first serve basis. No tickets will be sold at Rusk ISD and no passes of any kind will be accepted. Everyone attending the Crockett at Rusk game must have a pre-purchased ticket to enter the stadium. All tickets are $5 and are for General Admission seating, he explained.

He also went on to say he was considering using an online app.

Changing gears somewhat, Emerich was asked – as a first year superintendent – what his biggest challenge had been, so far.

“Obviously, dealing with the ever changing COVID-19 guidelines. They have changed since the day I took over as superintendent. Things have been one way and then changed the next day. That has been a real challenge. Even talking to friends of mine who had been superintendents for a while, they said that has been their biggest challenge, as well. When the kids came back last week, even though they were wearing masks, it was at least a little sense of normalcy. I was named superintendent the day we came back from Spring Break and my first official decision was to delay that by an extra week. It was great to have the kids and the staff back and to just get back to the business of having school. I really believe being here in school is the best thing for kids. We are taking all of the precautions we can to keep them safe. That is our number one priority but, we are having to mix that in with our other number one and that is to teach kids,” he said.

“One thing about educators,” Emerich added, “many people don’t realize just how flexible they are. There was a lot they had to change and adapt to, as the situations changed. They are certainly doing a wonderful job of that. I’m just glad to be back in school and educating kids because that’s what it is all about. We would also like to continue to ask for the community and parent support we have received so far.”