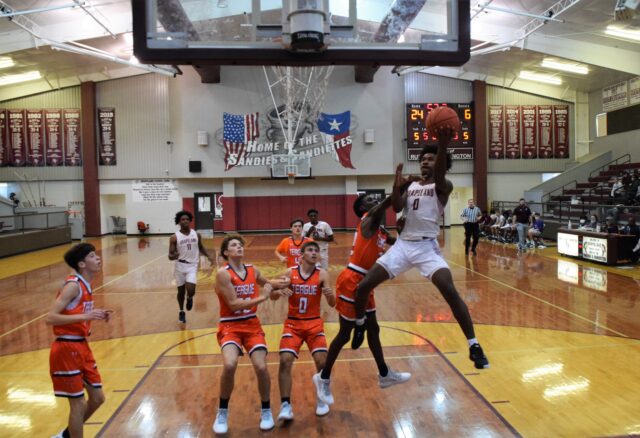 GRAPELAND – It’s still very early in the season, but the Grapeland Sandies look like they are the real deal. The Teague Lions found this out the hard way on Monday afternoon as they traveled to Grapeland to take on the new, Class 2A #2 ranked Sandies and left with an 82-29 thumping.

Grapeland made Teague look bad on all levels as the Sandies’ defense kept the Lions from reaching double digits in every single quarter while the Teague defense had no answer for Grapeland’s high-powered offense.

The Sandies opened the contest on a 16-2 run before closing out the first quarter with a 21-point lead. Keizion Ashford and Riley Murchison single handedly outscored the entire Teague team as Ashford poured in 10 points in the first eight minutes of play while Murchison dropped in eight. Cadarian Wiley worked inside for four while Michael Dancer, BJ Lamb and LeLe Smith added two apiece.

Jehmel Rice put in four for the Lions while Wayland Allison added two and Jacob Callahan made one of two from the line as the Lions trailed 28-7 after the first quarter.

Things didn’t get much better for Teague in the second quarter as Grapeland stretched the lead out to 31 by the time the horn sounded to end the first half of play. Murchison netted four while Ashford, Dancer, Wiley, Smith and Peyton Prater all had two. Cole Goolsby and Johnny Lamb both chipped in one apiece to close out the Grapeland first half scoring.

Teague’s points came from Rice with four and Allison with two as the Lions trailed 44-13 at the break.

As the second half got underway, the Sandies used a 14-2 run to put the game on ice. Lamb found his range from behind the arc and drained three, three-pointers. Dancer and C. Wiley added four apiece while Goolsby, Murchison and Omarian Wiley all chipped in two.

Allison continued to pace the Lions with five points in the third while Rice added two as Teague found itself staring up at a 67-20 deficit at the end of the third quarter of play.

Even with all the Grapeland starters on the bench, the Sandies still outscored the Lions 16-9 in the final eight minutes. Smith dropped in five while Goolsby added four. J. Lamb and O. Wiley both knocked down three-pointers, while Prater added a free throw to close out the Sandies’ scoring.

Teague’s fourth quarter points came from Allison with six, Bryceson Black with two and Tylin Randle with one as the Sandies blew out the Lions by a final score of 83-29.

On the game, Teague was led in scoring by Wayland Allison with 15 points and Jehmel Rice with 10. Bryceson Black added two while both Jacob Callahan and Tylin Randle chipped in one apiece.