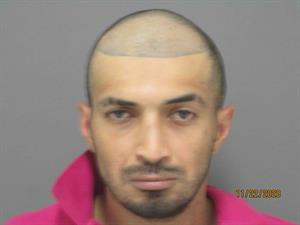 CROCKETT – In the television series “Breaking Bad,” the main character – Walter White – managed to elude law enforcement while manufacturing a startling amount of methamphetamine. This is real life, however, and on Sunday, Nov. 22, a bad brake light led to the arrest of a Crockett man who was in possession of nearly six pounds of meth.

According to an affidavit of probable cause, the Nov. 22 incident began shortly after 5 pm when Crockett Police Officer Nicholas Martinez attempted to conduct a traffic stop on a vehicle for not having a third brake light.

“As I (Martinez) attempted to catch up with the vehicle to activate my lights, the driver took off at a high rate of speed down Briar Lane,” the affidavit reported.

From there, the vehicle traveled down Hackberry Street and then turned onto the 100 block of Charles Street, where it parked.

Once Officer Martinez located the vehicle, he attempted to make contact with the driver. He was met by another individual at the residence who pointed out the vehicle owner.

Martinez met with the vehicle owner who identified himself as Jonathan Ventura, 34. Ventura admitted to just getting out of the vehicle and running into the house. When the police officer asked if he had brought any narcotics or any other illegal item into the house, Ventura replied he had not.

Following a brief discussion, Martinez informed Ventura he would need to see some form of identification.

“After looking in his vehicle and not locating anything, he (Ventura) attempted to go into his residence to find some proof of identification. As I followed him into the residence, I observed a glass pipe used for methamphetamine on the coffee table,” Martinez indicated in the affidavit.

Ventura was detained and led outside by other police officers – who had arrived on the scene – while Martinez began to conduct “… a probable cause search of the immediate area. The only property located at this time was the meth pipe.”

While Ventura was outside with the other officers, it was learned his real name was Herson Ventura and he had an active warrant for his arrest. Ventura was then placed under arrest for the warrant, as well as failing to properly identify himself.

At this point, Ventura’s girlfriend arrived at the scene. She identified herself as the owner of the property and gave her permission to search the entire house.

“As I began to search the house, I located a large amount of methamphetamine in a glass cooking dish and a large glass measuring cup that weighed 2,631 grams (approximately 5.8 pounds). Still with consent to search, I searched the rest of the residence and located several more narcotics that included: marijuana which weighed 0.05 ounces; heroin that weighed 3.3 grams; liquid methamphetamine that weighed 222 grams; another methamphetamine pipe; and a scale,” the affidavit stated.

A second degree felony carries a punishment of between two and 20 years and up to a $10,000 fine.

Because of the parole warrant, Ventura has been “no-bonded.”