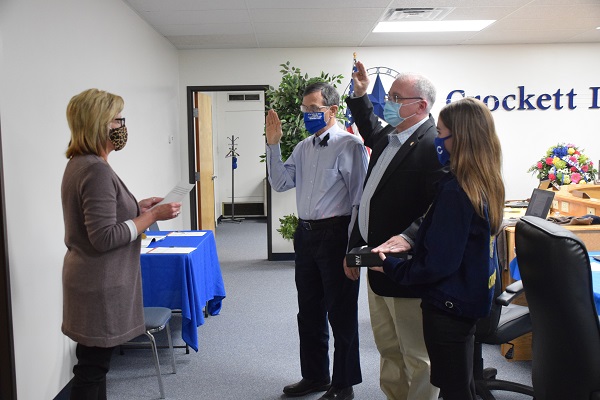 CROCKETT – The Crockett Independent School District Board of Trustees met in an emotional meeting on Monday, Nov. 16, following the passing of long-time Board President Lela Wheeler.

As the meeting began, the first order of business was the canvassing of votes from the Nov. 3 General Election.

Houston County Elections Administrator Cynthia Lum was on hand for the meeting and thanked the CISD Board for allowing the county to conduct the recently held election.

“I have presented to you the official results, as they were printed off of the computer. Any additional ballots that had to be counted by hand or came in provisionally were added on to your list. Your official results showed (incumbent) Mo Amjad with 301 votes and Stephen Tuggle with 316 votes,” Lum said.

Once the canvass had been approved, Amjad addressed the board.

“I just want to thank the board. I appreciate it and I really enjoyed working with y’all for the last nine years. If there is anything else I can do, please let me know. Thank you and Mr. Tuggle, congratulations,” he said.

Before Tuggle was sworn in, Board Vice President Karen Norman said, “We want to extend our condolences to the Wheeler family. Ms. Lela, she will be missed.”

Board Secretary Dr. John Garner added, “Each of us could say wonderful things about Lela Wheeler. In the nine or 10 years I have been on the board, I have grown to appreciate her more and more as time went on. She added calmness, stability, wisdom and other characteristics that were probably not perceived or known by everyone. The board members knew that and knew she wanted what was best for the students and the district. That is an unusual quality that will not be replaced and will only be missed. She was a very special person.”

Board member Roy Johnson expressed, “I will truly miss her because she was there for me.”

As the tributes to Wheeler continued, board member Ansel Bradshaw led the trustees in a prayer of remembrance, healing and comfort in her honor.

The next item on the agenda was the swearing in of Stephen Tuggle to the District Two Trustee’s Position. Dr. Garner was also sworn in to a new term. He did not draw an opponent in the Nov. 3 election.