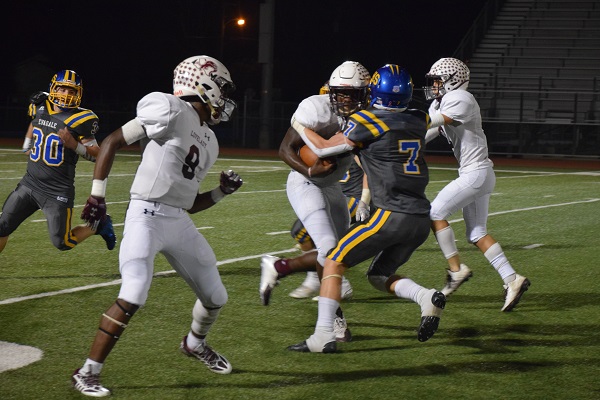 CLEVELAND – The Lovelady Lions made the long trek to Cleveland, Texas on Thursday evening to take on the Evadale Rebels in the first round of the 2020 UIL Football Playoffs.

Lovelady and Evadale had both faced the Cushing Bearkats with the Lions dismantling the Bearkats 56-24. Conversely, Evadale had been hammered by Cushing, 44-0. Given that backdrop, Thursday night’s game was about as expected as the Lions crushed the Rebels, 50-12, to capture the Bi-District Championship and advance to the Area Round of the postseason.

Evadale opened the game with possession of the ball and on first down Rebel QB Chase Smith completed a pass to Tom Boles for 16 yards. After that, the Lovelady defense started to set the tone for the remainder of the game as they slammed Smith to the ground for no gain, tackled RB Anthony Barnes for a loss and then sacked Smith on third down to force a punt.

The Lions took over at their own 37 and on first down, Shaun Easterling gained seven. Lovelady QB Slade Murray was thrown for a loss on second down and threw an incompletion on third down to force a Lovelady punt.

The first big break of the game happened on the kick when the Evadale punt returner mishandled the ball and the Lions pounced on it at the Rebels’ 30.

Conner Martinez picked up 13 yards on first down to move inside the Rebels’ red zone and three plays later, Dayvian Skinner bulled his way across the goal line for the first score of the game. Martinez added the two-point conversion and with 5:13 left in the opening quarter, the Lions led 8-0.

The Rebels next series of downs went nowhere and was punctuated by Lovelady’s Jaxson Reeves driving Smith into the turf on third-and-long to force a punt.

Lovelady’s next possession saw the Lions turn the ball over to the Rebels on a fumble following a drive deep into Evadale territory.

Starting at their own 10, Evadale managed to get out to the 25, but once again, the Lovelady D bowed up and forced a punt.

The Lions took possession at the Rebels 41 and it didn’t take long for them to atone for the earlier turnover. Murray picked up three on first down and then Easterling ripped off a 28-yard gain. Murray completed a pass to Kevion Skinner to move inside the 10 and from there, Easterling took it the final six yards to pay dirt to put the Lions up 14-0 with 8:35 left in the second quarter.

Another three-and-out from the Rebels gave the ball right back to Lovelady at their own 40. Following an incompletion on first down, Murray kept it himself and galloped 60 yards – untouched – to the end zone. Easterling added the try for two and with 6:41 still remaining in the first half, the Lions now led 22-0.

The Rebels next possession was just ugly. Martinez tackled Landon Hoke for a loss and on second down, Easterling tracked down Smith in the backfield and then went all Junkyard Dog on him with a belly-to-back suplex that left many in the stands wondering if Smith would get up. The carnage continued on third down as Reeves blasted Anthony Barnes behind the line of scrimmage to force the Rebels into yet another punting situation.

The Lions took over at their own 22 and used Eric Anderson to move the ball out to the 34. On second-and-nine, Murray dropped back to pass and saw Caleb Gilchrist had a step on the Rebels’ secondary. Murray threw a perfect pass that Gilchrist caught in stride on his way to a 66-yard TD reception. K. Skinner added the two point conversion to push the Lions’ lead to 30-0 with 2:29 left in the half.

The Rebels finally managed to generate some offense just before the break. On first down, Smith threw to wide-out Tyler Ferguson and took off around the end. Ferguson, who was behind the line of scrimmage, then threw back to Smith for a 32-yard gain down to the Lovelady 27-yard line.

Two plays later, Smith connected with WR Tom Boles on a 19-yard scoring strike – with 22 seconds left in the half – to cut the Lovelady lead to 30-6. The two-point conversion attempt was no good and as time expired, the two teams headed to their respective locker rooms at halftime with Lovelady up by 24.

As the second half got underway, Evadale tried to use a play from the New Orleans Saints with an onside kick-off. Let’s just say the Rebels’ Head Coach Mark Williams ain’t Sean Payton. Lovelady took over on their own 46 and started to march.

Easterling picked up seven on first down but a holding penalty on second moved the ball back across midfield. Not to be denied, the Lions ran a jet sweep on the ensuing play and K. Skinner worked his way down the field for 42 yards. From there, Easterling took it the rest of the way for his second TD of the game. The try for two was unsuccessful but the Lions now led 36-6.

The two teams traded possession for the remainder of the quarter until less than two minutes remained in the third period of play. Starting at their own 31, Murray picked up two yards on first down and then connected with Brenton Crawford for a big gain down to the Evadale 25.

A penalty on the Lions brought ball back to the 40, but K. Skinner picked up 21 yards on first down and then Easterling took it the rest of the way for a 21-yard touchdown. Anderson added the two-point conversion and at the end of the third quarter, the Lions led 44-6.

Jordan Blackmon would add a late TD for the Lions while Tyler Ferguson would cross the goal line for the Rebels to make the final score 50-12.

The win moves Lovelady into the Area Round of the playoffs where they will face the Mart Panthers. The game will be held at Caldwell High School on Friday, Nov. 20 with a 7 pm kickoff. 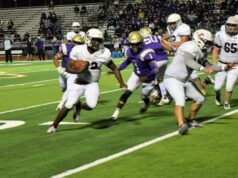